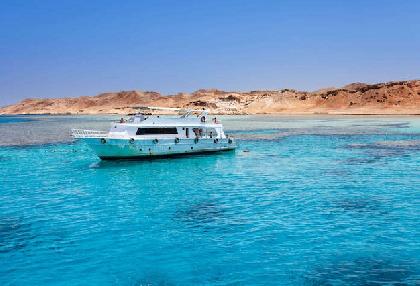 Tiran and Sanafir Islands are two of the most spectacular islands where you can spend an enjoyable trip. They are located near the city of Sharm El-Sheikh along the Red Sea in Egypt and are considered part of the National Park of Ras Muhammad. The two islands were under the control of the Egyptian government but currently, they officially belong to Saudi Arabia according to an agreement made between both Egypt and Saudi Arabia. They feature charming colourful fish and coral reefs, and thus your visit must include diving and snorkeling to enjoy the clarity of the Red Sea and the beauty of the underwater world. Moreover, you will be captured by the fascinating landscapes along with touristic landmarks, including the wrecked ship in the middle of the sea which has been there for several years. Do not also forget to experience an entertaining yacht trip. Your visit to Tiran and Sanafir Islands will be full of several interesting activities, enjoyment and relaxation.