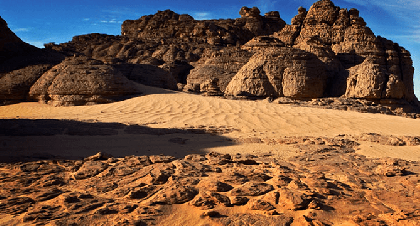 Gilf El-Kebir National Park is located in the New Valley Governorate which is around 1600 kilometers from the city of Cairo and lies on the Libyan-Sudanese border. It was declared as a protectorate during the year 2007 AD. It features sand dune plains along with ancient caves related to the Prehistoric period, and these plains are situated between Gilf El Kebir plateau and Gabal El Uweinat. In addition, it includes Nubian sand rocks, ancient volcanic holes as well as mountainous areas and valleys. There is also one of the largest Meteorite fields in the world. It is an area that supports the survival of wild animals such as wild sheep. In addition, it houses different species of birds like Egyptian vulture, stroke, long-legged buzzard and more, in addition to containing several mammals, including Rüppell's fox, Gazelle and others. The protectorate is one of the well-known destinations which attract various tourists from all over the world to enjoy the adventure of going on safari trips in the desert and climbing the peaks of mountains and to watch amazing natural scenes. Therefore, if you are an adventurous person and wish to have an exciting trip, do not hesitate to head to Gilf El-Kebir National Park and have an entertaining time.