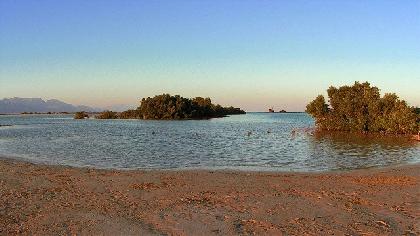 Nabq Protected Area is a popular touristic site in Egypt which is visited by many tourists from all over the world. It is located in South Sinai and is considered one of the largest coastal protectorates in Egypt. You can visit it while you are heading to the amazing city of Sharm El-Sheikh since Nabq is situated 25 kilometers from the city. It was declared as a protected area around the year 1992 AD for the purpose of preserving coral reefs and mangrove trees. It is the perfect place for relaxing and having a quiet time among nature. The beauty of the protectorate lies mainly in its mangrove trees which are spread along the shore, create a refreshing scene that gives a feeling of relief, also have a major role in refining salt from seawater and serve as a resident for birds and fish. If you are fan of birds and enjoy bird watching, you will find that the protectorate houses a large number of birds of different species and is also a shelter for some migratory birds. There are also various species of animals like gulls, herons, terns and others. You can also try the stunning diving or snorkeling experiences which allow you to explore the deepwater and enjoy watching capturing underwater sights of coral reefs, many types of fish and more. In addition, Nabq protectorate is home for Bedouin tribes who help in guiding visitors because they are totally aware of the area, and you will get to experience riding camels and camping. Visiting Nabq is certainly a great idea for those who wish to have a relaxing or adventurous trip.