Mostafa Kamel Necropolis - Main Destinations in Egypt : Travel to Alexandria : What to Visit in Alexandria : -

Mostafa Kamel Necropolis is located in the El-Moaskar El-Romani Street, in Rushdie Zone. It has four subterranean rock-hewn tombs that date back to the 3rd and 2nd century BC. The thing that most characterizes those tombs is their bright colors and relief inscriptions, which illustrate the everyday life of the dead. At the necropolis, the most interesting tomb is Tomb I. A stairway leads to loculi with an open courtyard with an altar facing the south wall. The courtyard is decorated with engaged Doric columns and sphinxes. Behind the altar there are three doorways leading into a vestibule. The tomb had a cistern for water. 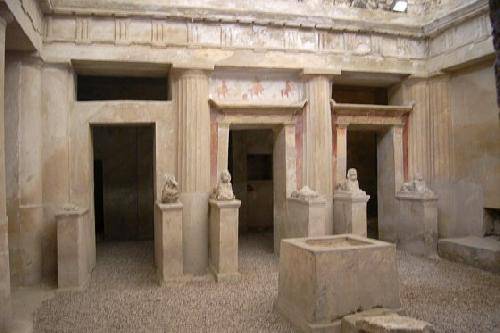