Catacombs of Kom El-Shuqafa - Main Destinations in Egypt : Travel to Alexandria : What to Visit in Alexandria : -

The necropolis of the Catacombs of Kom El-Shuqafa (literally means the Mound of Shards or Potsherds) is the most famous and the most visited place in Alexandria. The largest known Roman burial site in Egypt, the necropolis is located in the area of Kom El-Shuqafa (or Koum el Shoqqafa), near Pompey Column. The necropolis includes a group of Greco-Roman cut-rock tombs that date back to the 2nd century. Since the catacombs were built to house more than 300 dead notables, there are plenty of tombs to explore as well as a banqueting hall. The plan of the tomb is used to be a stairway leading down to a three-leveled burial tomb, around a shaft. The shaft leads to a vaulted vestibule with niches for the mummies. The three-leveled burial chambers expose an impressive architectural achievement since its three levels reach a depth of 100 feet. The tomb ends with a cut-rock burial chamber with a sarcophagus protected by Anubis, Isis and Nephtis. The scenes echo a blend of both the Greek and ancient Egyptian decorative artwork. There is an unusual combination of ancient Egyptian iconography with Greco-Roman motifs: one relief wall carving shows the jackal-headed Egyptian god Anubis wearing the uniform of Roman soldiers. 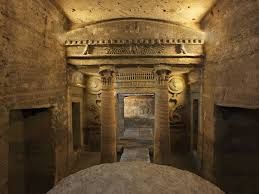