Ibrahim Terbana Mosque  - Main Destinations in Egypt : Travel to Alexandria : What to Visit in Alexandria : -

The hanging Mosque of Ibrahim Terbana is situated in Manshiah District, in the city of Alexandria. It was founded in 1685-1677 AD (1097 AH) by Haj Ibrahim Bin Ebeid El-Maghrabi, one of the Moroccan merchants who came to Egypt from Mesratah. This justifies the Moroccan style that is applied to the mosque. What most characterized this style are its small red and black stones used in decorating big houses and mosques. It is described to be a hanging mosque because the prayer hall is on the second floor above a series of commercial stores.

There was a Sabil annexed to the mosque until 1993 AD / 1413 AH, now destroyed. The marvelous Minaret of the mosque was built of granite. Having three sections, the Minaret is tube-shaped with a dome at its uppermost portion. The interior of this notable building is supported by a number of Greco-Roman columns with grand Roman decorations at the top. While the walls of the mosque lack decoration, the Mashrabeya windows are highly decorated with fine, accurate ornaments. The stunning Mihrab is decorated with ceramic tiles affected with the Moroccan style. It is faced with the Dikka, a big rectangular balcony. The beauty of the ceiling is driven from strips of colored wood applied to it. 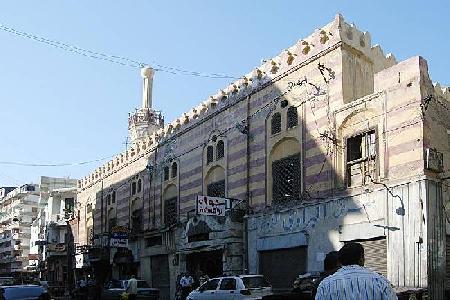