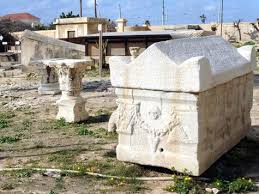 A hole in this building leads to a cistern. One can proceed to reach the second funeral construction through staircase leading to a yard. Walls of the two tombs of this building are gracefully decorated with long fresco stripes and Pharaonic ornaments. The first tomb of this building comprises a chamber bare of decoration except for some carvings of Roman warlike sailing ships. The second tomb has a door flanked with two small pillars; each has a statue of sphinx on its top. Most of the third funeral construction had sunk and its stone blocks were used in the construction of other buildings. What most distinguishes this construction is that it comprises 3 chambers dug into the ground instead of just two. It also contains a number of niches made to be the burial place of the dead. The fourth building is semi-ruined with its first chamber containing remains of three mastabas. To the right of this chamber, there is a cistern. The second tomb of this building is of a rectangular shape and comprises ruins of two rock-cut mastabas. The fifth and last funeral construction is considered the richest in decoration and relief. It has a rock-cut tomb, with a staircase and an open courtyard, from which one can view four small chambers.