Cistern of Yaqub Shah El Mihmandar - Main Destinations in Egypt : Cairo, Much More Than a City : Other Islamic Monuments in Cairo : - 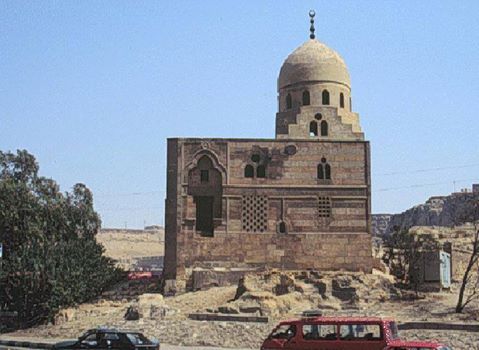 The Cistern of Yaqub Shah El-Mihmandar locates in Salah Salem street nearby the Eastern Approach of the citadel. It was established by Yaqub shah who was the Mamluk Chief of Protocol. Few meters away from this cistern one can find the Ayyubid wall that date back to the time of Saladin with its half round towers and arrow slits and El-Adel's tower.

One can see also the mosque of Mohammed Ali and the palace of Gawhara in the surrounding area of the cistern. This cistern was established to commemorate the Mamluk victory in 1486 battle of Adana. The beauty of this building is accentuated by the handsome decoration of the façade and the dome that was usually used for surmounting the tombs only before.

Amr Iban El-As chose the plain close to the fortress of Babylon, to build the new arab capital in Egypt. Here he built his mosque which still stands though repeatedly altered or restored and here he began and foundation of the city which he called El Fustat which remained the capital of Eg

The area of Bain El-Qasrayn or the Palace walk is the center of the medieval and the Fatimid Cairo in El Muiz Street. It is called in that name because there were two palaces dating back to the Fatimid period in that area. The inscriptions that appear on the remains of these palaces show that they w

The Khanqah of El Bunduqdariya locates in El Darbel Ahmar District in El Helmia Street. It was established by El-Bunduqdariya who served as an officer for El-Saleh Nagm El-Deen Ayyub in the late Mamluk period. The monument is a small domed tomb that is known as Zawiyat El abbar now. The dome of

The Sultaniya locates in El-Sayyida Eisha Square nearby the Mosque of Sultan Nur El-Deen and the Mosque of El Sayyida Eisha . This monument was constructed by the mother of Sultan Hasan in the Bahri Mamluk period. It was a part of a complex that contained a Khanqah which is asserted by the

Madrasa of Emir Sunqur Saadi situates in El-Seyufia Street off El-Helmia Street nearby the Palace of Qawsun . It was built by Emir Sunqur El-Saadi who was the Royal Chief of Mamluk at the time of Sultan El-Nasir Muhammad . After building the mausoleum and the Madrasa, he quarreled with Emir Qawsun

The Hammam of Emir Bashtak lies in Suq El-Selah Street. It was used as a means for facilitating bathing for the low and middle class women who inhabit nearby it. This Hammam was established by Emir Sayf El-Din Bashtak who was the officer of El-Malek El-Nasir in the Mamluk period. The

The Hod of Shaykhu lies in The Citadel district nearby the Mausoleum of Yunus Dewedar . It was erected by Emir Shaykhu who was one of the famous Emirs during the reign of the Sultan El Nasser Ibn Hasan. In 1351, he played a great role in supporting Sultan Hasan in restoring his power. Ther

The Hammam of Sultan Inal locates in El Moez Le Din Allah Street nearby the Madrasa of El Kamil Ayyub. It is the only remaining part of a whole complex that was consisting of a Wikala or commercial center, a fountain, and two Hammam or baths for men and women. The constructor of this compl

The Khanqah of Sultan Baybars II locates in El Gamaliya Street Facing a small Sabil and Kuttab that was constructed by Qitas Bey in 1630. This is one of the oldest and the earliest Khanqahs in Cairo to be attached with a royal tomb. The place of this Khanqah was earlier occupied with a pal

The Maristan of Muayyad Sheikh is a hospital built by the Mamelouk sultan Al-Muayyad Sheikh in 1418 and 1420. It is sitautedin el Darb al-Ahmar district in Cairo near the Citadel of Saladin and Bab al-Wazir gate. A Bimarsetan is a historical hospital that was built by rich people or amirs,

Maristan of Sultan El-Muayyad Shaykh lies in nearby Sultan Hasan Street and few meters away from Sikkat El-Komi Street. This Maristan or hospital was constructed in Sultan El-Muayyad to provide the inhabitants of the Citadel with the health care services that they need. After his death the

The Aqueduct was built during the rule of The Mameluk Sultan El Nasser Mohammed . Sultan El Ghuri made some additions extending it to its actual length. It locates in Fumm El Khalig that begins from Sharia Qasr El Ayni along Sharia Port Said. The Aqueduct was used originally for transmitti

The Maqaad of Radwan Bey lies in Bawabet El-Metwalli Square nearby the Qasaba of Radwan Bey and in front of the Mosque of Mahmoud El-Kurdi . It was erected by the Mamluk Emir Radwan Bey. The courtyard of the Maqaad can be reached through the gate on the right side of the building. It is crowded wi

The Qasaba of Radwan Bey lies in El Darb El Ahmar in front of Bab Zuwayla . It was established in the Ottoman period by Emir Radwan Bey who was a man of religious prestige and political effect. He was responsible for Pilgrimage affairs for 25 years. Before being part of the property of Rad

The Tekiya of Sulayman lies in Bab Zuwayla next to the Mosque-Mausoleum of El-Bahlawan . The building was dedicated for the Sufis in the past, but it is still inhabited by people till now. The monument was established by Sulayman Pasha who was the governor of Egypt for ten years. He is

Tekiya of El-Rifaeya locates in Bulaq next to the building of the World Trade Center and opposite to the House of Ahmad El-Rifaey who was regarded as the founder of the Rifaey Mazhab that was adopted by many people in the Medieval Egypt and the saint of the Snake Charmers in Egypt. This bu