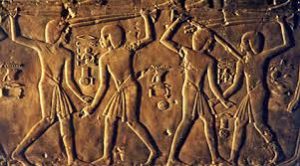 TT 192 is  located in the necropolis of El-Assasif . Kheruef was a wealthy and powerful court official, son of an army scribe and a chanter in the temple of Amun. Shortly after the death of Amenhetep Ill, he rose to become a Prince, or high official, Overseer of the palace of the great royal wife Tiy, the Royal Scribe, and Seal-Bearer of the King in Upper Egypt. The tomb is situated in 'Assasif, few hundred meters east of Dayr al-Bahari, near the Metropolitan House (headquarters for New York's Metropolitan Museum of Egyptian Art Expedition in 1920s and I930s). The tomb is being visited by explorers and tourists since 1886 and it was hacked several times, the last is in 1940, however it has paintings considered among the finest examples of the New Kingdom relief. At the entrance, we can find scenes and texts about the work of Kheruef in preparing for the Heb-Sed festival of Amen-Hotep III. It is well worth watching the beauty of the princesses giving offerings to Amen-Hotep III, as well as the acrobatic dancers and singers.