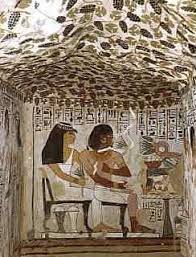 TT 96 Senn-Nefer was Mayor of Thebes, Overseer of the Garden of Amen, one of the most considerable figures and one of the most important court officials during the reign of Amenhotep II. There is no evidence attesting that Senn-Nefer was actually buried in this tomb. Therefore, Egyptologists think that due to his great prestige in the court of the pharaoh, it is possibly that he was buried in the Valley of the Kings, since objects belonging to him and his wife, Meryt, were found in the Tomb of Thutmes II. Considered as one of the most beautiful tombs in the Theban Necropolis, it is famous for its ceiling that shows grape leaves, the reason why it called the 'Tomb of the Vines'. The artist who decorated the tomb converted the problem of the bad quality of the rocks of walls and ceiling into a creative solution: he decorated the ceiling with a grape arbor and a cloth-covered gazebo.

The undulating surface makes the bunches of grapes seem three-dimensional. Besides scenes of daily life, detailed funerary scenes can be seen, in which the deceased King mentions plenty of those who had been close to him in his life, like: Senetnefert and Senetnay, Senetmi, Senetemiah, and Meryt. The paintings show the love passion shared between Senn-Nefer and his wife, who is shown many times throughout the tomb. His beloved daughter, Muttui (called a Chantress of Amen), is also mentioned. In the antechamber, we find attractive, beautiful and touching scenes, like those of Muttui offering necklaces (now destroyed) and a heart scarab to her father; those of priests carrying offerings of cloth, beef, and incense; and those of Servants carrying boxes of funerary equipments to the tomb (including beds, collars, sandals, shabti-statues, etc). 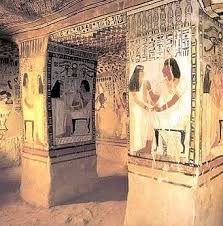 In one of the scenes, Senn-Nefer is depicted sitting on a chair holding a scepter and staff, wearing earrings and a double-heart amulet around his neck, with Muttui standing behind him. In the Burial Chamber, one can find the lovable scene of Senn-Nefer and Meryt magically leaving the tomb to enjoy the sunshine. On the left side of the front wall, Senn-Nefer's son prepares burnt offerings for his parents. Also found were damaged scenes of the funeral procession, mummification of Senn-Nefer by Anubis, and the symbolic voyage of both the King and his wife to Abydos. On the four pillars of the burial chambers, Senn-Nefer is found among women of his family, especially Meryt and his daughters.