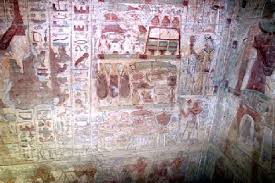 Setau was the High Priest of Nekheb during the reign of Ramses III in the Twentieth Dynasty. Four steps lead down into the Tomb of Setau and on the left wall there are badly damaged scenes, showing ploughing, harvesting and the Funeral Boats. Over these mention is made of the first Heb-Sed Festival of Ramses III in his 29th year, witch was performed by the Vizier Ta. Though seriously damaged, his tomb still shows the freshness of its colors and the quality of its reliefs and paintings. Discovered in the tomb were: stela depicting the deceased and his wife adorning Re-Horakhty and a number of boats (including the barque of Nekhbet). Walls of the tomb are decorated with multiple scenes showing Setau's son-in-law, vizier Ramessesnakht, making offerings to the deceased, his wife and relatives in a banquet. Under the seat of the wife of Setau is a relief of a tame Baboon.