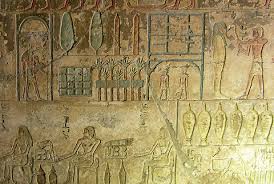 Ahmose Pennekhbet came from the city of Nekhbet and was buried there. Among his titles were the Overseer of the Seal of the Pharaoh, Hereditary Prince, Count, Wearer of the Royal Seal, Chief Treasurer during the first years of the Eighteenth Dynasty, under the rules of Ahmose I and until the reign of Thutmes III. In the tomb, one finds biographical texts that tell about his participation in the campaigns in Kush, Nahrin, Shasu and Syria. Also found are scenes of Ahmose with his son and other relatives.