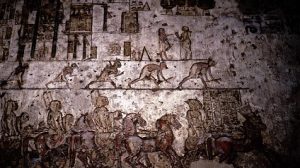 The tomb of Meri-Ra II locates in Tel El Amarna nearby the tomb of Huya. Meri-Ra II was one of the prominent figures in the reign of Akhenaton who held numerous titles including Superintendent of the Harem of Nefertiti, Royal Scribe and Overseer of the Two Treasuries. The damaged scenes of his tomb can still show Meri-Ra II worshipping Aten, some of the Hymns to Aten, and the royal family. Some interesting scenes depict Akhenaton giving Meri-Ra II a god collar as a present and other scenes picture foreign envoys in their native dresses paying tributes with exotic products of their countries. One of the distinguishing scenes within Meri-Ra Tomb is the depiction within the window of appearances where he is presented while receiving awards of the king.