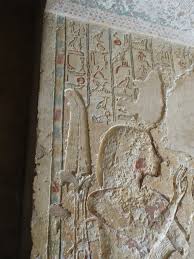 Ahmose was Fanbearer on the Kings Right Hand' and Royal Scribe at Akhetaten during the reign of Akhenaton. The Tomb of Ahmos consists of a cruciform layout that begins with an outer court once surrounded by an outer wall. This court leads through a doorway to a small entrance hall which in turn leads to the corridor-shaped chapel. From another doorway, it leads to the transverse hall which contains two burial shafts. This hall leads to the shrine which contains a rock-cut statue of the tomb's owner. The reliefs in the tomb were finely worked and painted. Though seriously damaged, such reliefs still provide much information pertaining to the new faith, Akhenaton and Ahmose. The scenes represent Ahmose worshipping Aten, who is represented as a solar disk with his rays terminating in hands giving the key of life. A portion of the Hymn to Aten is reproduced. Also depicted are scenes of the royal family, the King's house, the royal army, as well as of Syrian, Nubian and Lybian soldiers. Attractively appealing is the scene the pictures the King's house and bedroom. Worth admiration in the shrine at the end of the tomb is the damaged statue of the deceased.