Temple of Osiris and Opet in Karnak - Main Destinations in Egypt : Luxor, City of Thousand Gates : - 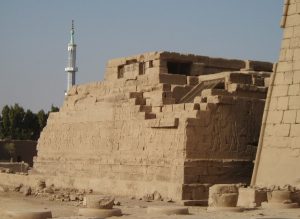 In the complex of Karnak, west of the temple of Khnosu, the visitor can see the small temple of god Osiris and goddess Opet built by Euergetes II. Opet was the goddess of childbirth and was also adored as Osiris' mother. The Egyptian mythology, from the Ptolemaic era, relates that when Amun died, he took the form of Osiris and entered the body of his mother Opet-Nut and he came back to life as Khnosu. The temple stands on a podium that resents the primordial mound of creation. Under the podium, a pair of chambers cut below the temple floor served as a crypt and chapel for Osiris. Surrounding a two-columned hall, are nine small dark chambers which have texts and scenes of Ptolemy II contemplating before Opet, Osiris, Horus, and other deities.