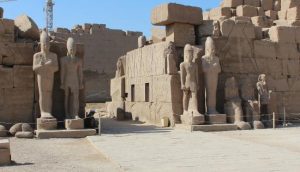 To build their shrines, pylons, chapels, and sanctuaries, many Pharaohs reused earlier structures in their core. In the Open Air Museum, located in the Northwest corner of the complex, there are reconstructions of some of these earlier structures, notable amongst them: the Chapelle Rouge of Hatshepsut, and the White Chapel of Senusret I. 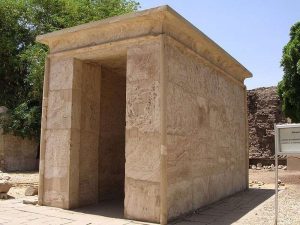 The Alabaster Shrine of Amenhetep I

Pharaoh Amenhotep I erected several buildings in and around the Middle Kingdom Court, several of which were dismantled and used as fillings in the Third Pylon and to create the court before the Seventh Pylon. One of these, from the Third Pylon, is an alabaster bark-shrine, The Menmenu, recently reconstructed in the Open-Air Museum. it originally stood in the Middle Kingdom precinct as a repository for the sacred bark of Amun. Amenhetep I's Shrine consists of a single chamber, built by huge blocks of alabaster, and it only measures 9 meters long. Scenes on the outer north wall of the Menmenu show Amenhetep I mystically joined with the god Amun, dedicating offerings of food, oils, and water as part of his coronation ceremony. The outer face of the south wall is decorated with figures of Thutmes and some scholars think this proves that the shrine was built late in the reign of Amenhetep I. The interior faces of the two walls show Amenhetep I and Amun standing before offerings and a divine bark.

- The Red Chapel of Queen Hatshepsut

The Red Chapel of Queen Hatshepsut was erected in the museum in the year 2000. It has several names and descriptions; Chapelle Rouge. The Red Chapel shrine, Barl shrine, chapel or way station. Like the others, The Red Chapel function was a temporary resting-place for divine barks during religious processions. The monument, which was reused as a filling for the 3rd Pylon has cartouches of Thutmes III and Hatshepsut. It is built of quartzite on a base of granite. There is a cornice across the top. The courses of stone are laid horizontally with vertical joints between the blocks. Each register is one block in height, and there are six registers on the exterior wall, seven on the interior. Each block is of a slightly different length so that it can accommodate a single scene or part of a scene. 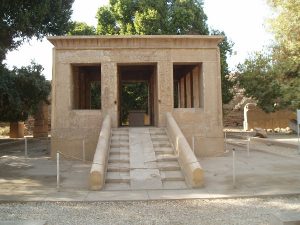 The French archaeologists found it while working on restoring the Third Pylon of the Temple of Amun, In the autumn of 1927. In 1937, Pierre Lacau and Henri Chevrier began to reconstruct the building which they called the White Chapel. It dates back to the times of Senusret I of the Middle Kingdom for the celebration of his first Sed Festival and it represent the finest example of relief-carving that come from the Middle Kingdom. It is a small monument of 6.75 square meters, with ramp and stairway combinations at either ends that lead to the chapel floor, 1.8 meters above the ground. The shrine has four rows of four pillars, each 2.5 meters. Besides its artistic importance, the shrine is a very useful historical resource as it helps us in reconstructing the geography and politics of ancient Egypt. It has a list of nomes, the ancient administrative districts into which Egypt was divided, on the outer walls, carved in a series of rectangles just below the shrine's windows. On the left Wall, to the south, we find the nomes of Upper Egypt and on the right, to the north, those of Lower Egypt. For example, at the right-east end of the south wall appears the name 'Ta-Sety', the first nome of Upper Egypt called Elephantine or Aswan. Below, we find the nome 'deity' and 'measures'. Twenty-two Upper Egyptian and fourteen Lower Egyptian nomes are listed. Also, on the outer north wall of the chapel, flood levels at several sites along the Nile are given in cubits.

The Karnak temples are considered to be a history book stating the history of Egypt from the Middle Kingdom to the Ptolemaic Period. During the reig

Luxor Museum is one of the most modern museums of  Egypt Though it is not as huge as the Egyptian Museum in Cairo, the tourist may enjoy it bet

King Amenhotep III (of the Eighteenth Dynasty) and the son of Tuthmosis IV built the inner part of the Temple of Luxor, close to the Nile, just to t

In Luxor, the Egyptian government does not permit the construction of bridges over the Nile in order to allow the passage to the most valuable heritag

Housed in the old visitors' center of the Corniche in front of the Mina Palace Hotel, the Museum of mummification exposes everything about the mummi

It is dedicated to the Egyptian goddess Mut, the mother goddess of Khonsu and the wife of Amun. It is one of the four main enclosed areas that make

In ancient times, the Sphinx Avenue was known as Ipet-isut. The Sphinx Road is a 3 km-long avenue of sphinxes connecting Luxor Temple with the south

The Temple of Amenhotep IV (Akhenaten) is located to the east of the main complex, outside the walls of the main Karnak Temple. The temple was destr

Meri-En-Ptah Temple lies just behind the completely-destructed Temple of Amenhotep III. Early in the 1890, it had been partially cleared by Flinders

In the complex of Karnak, west of the temple of Khnosu, the visitor can see the small temple of god Osiris and goddess Opet built by Euergetes II. O

Son of Amun and Mut, Khonsu is the moon-god and third member of the Theban Triad. His Temple lies in the southwestern corner of Karnak Temple, immed

In Esna, Nile cruises and cargo ships have to cross two barrages. The old one, built by the British in 1906, is now obsolete, and al

It is located in the city center just minutes from Luxor Temple and the Luxor International airport. Built in 1886 on the banks of t