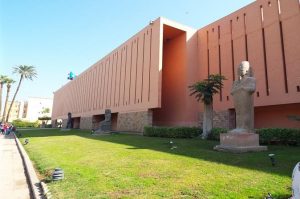 Luxor Museum is one of the most modern museums of  Egypt Though it is not as huge as the Egyptian Museum in Cairo, the tourist may enjoy it better because it is, without doubt, better conditioned and illuminated. Situated on the corniche, on the half way between the temples of Luxor and Karnak, The Luxor Museum has a small but selected collection of pieces from the end of the Old Empire to the era of the Mamluks, but the major part of it comes from temples and cemeteries of Luxor. 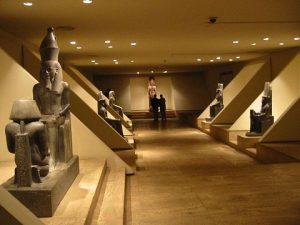 Piece No (n° 101) Just to the left of the entrance to the museum, we find a brightly colored painting from a tomb that shows the Pharaoh sitting and holding the scepter and the whip while he is fanned by two ostrich feathers.

Piece no. (No 126) To the right of the entrance of the museum, we see an enormous granite head of Amen-Hotep III. It is one of the many statues of his funerary temple, now in ruins, that stood alongside the Colossi of Memnon.

Piece No. 5 A black and gold head of the cow goddess Mehit-Weret, one of the forms of goddess Hathor and of the deities of the afterlife. This head formed part of the treasure of Tutankhamon. It is made of wood, lapis lazuli and gilt. 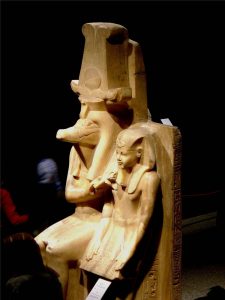 Piece no. 155 There is a set of alabaster of Amen-Hotep IIl protected by the crocodile god Sobek. The package was found in 1967 at the site of the Temple of Sobek in Dahamsah, at the bottom of a canal.
- Granite Head of Senusert III in Luxor Museum
Piece No. 34 A Head of Senusert III, made of red granite of Aswan. The king is wearing the double crown of Upper and Lower Egypt. In this statue we can appreciate the realism in the features of the king. He is not idealized as the Egyptian artist used to do in the Old Kingdom, rather he is shown serious and thoughtful.

- Scribe of Amenhotep, Son of Hapu in Luxor Museum

Piece no. 4 Going up the ramp to the second floor, we can see the granite sitting figure of the legendary scribe of Amenhotep, son of Hapu. Amenhotep was a great officer who was overseer of all works of Amen-Hotep III, and was in charge of carrying out many of the great buildings of ancient Thebes. He was deified in the Ptolemaic era. 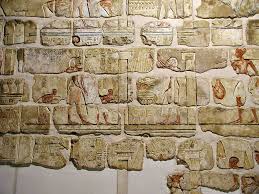 Piece No. 223 One of the most interesting pieces of the museum is the wall of Akhenaton. It is a set of small blocks of sandstone called (talatat) or "three", probably due to their height and length were about three spans. They were part of the contribution of Amenhotep IV to the Temples of Karnak before changing the name to replace Akhenaton, and leave Thebes to Tall El Amarna, or Akhetaton. After his death, his buildings were demolished and the blocks about forty thousands were used to fill the ninth pylon of Karnak. They were found at the end of the 1960s. The fragment shows Akhenaton with his wife Nefertiti and scenes of life in the temple. This is the only example we have for the decoration of a temple of Aten.

On the left to the exit, there is a small room that contains 16 of the 22 statues discovered in the temple of Luxor in 1989. The most important piece is a statue of quartzite of 2.45 of Amenhotep III. Also interesting is a beautiful statue of the goddess Hathor made of diorite and some cartouches of the Nubian pharaoh Taharqa.