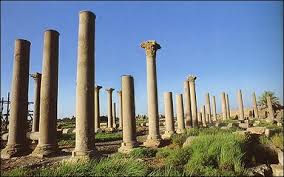 Akhetatun (Tel El Amarna currently) is an archeological site stretching on the east bank of the Nile, in El Menia Governorate. It is located about 58 km to the south of El Minia city and is regarded as one of the popular tourist attractions in Egypt. It contains the remains of the capital city built by the Pharaoh Akhenaten of the late Eighteenth Dynasty (c. 1353 BC). 'Akhetatun' once meant the 'Horizon of the Aten', who was the new sun god introduced by Amen-Hotep IV or Akhenaton. It was the cult for the worship of Aton, the sun god, and shortly after Akhenaten's death, the site was abandoned.

Construction started in or around the 5th year of his reign (1346 BC) and lasted probably for 4 years. Two years after the beginning of the construction of the city, Akhenaton impatiently moved to Akhetaton even before the completion of works there. Mostly, the city comprised within its walls white washed mud-brick buildings. Faced with local stone were the buildings of great importance. On the east bank of the Nile River, Akhetaten covered an area of land of approximately 12 kilometers. Probably, Akhenaton intended to conserve the cultivated land for the provisions of the city's population. The whole city was surrounded by 14 stelae that tell about Akhenaton's decision on building the city. Though badly damaged, the still- readable stelae provide clear details about Akhenaton's wishes to build temples for Aten and royal tombs.

Akhetaton had a royal road that extended from north to south, on both sides of which, the city was built. The city was divided into three main districts: 1-the North City, which was an administrative and official center containing –besides merchants' quarters –the Royal Residence. 2-The City Center, which contained the Great Temple of Aten and other ceremonial buildings. Here was also located the Correspondence Office of the Pharaoh, where the Amarna letters were found. 3- The Southern City, that contained the houses of the nobles such as: Nahkt (Chief Minister), Renefer (General), Panehsy (High Priest of the Aten) and Ramose (Master of Horses). In The southern area, the famous bust of Nefertiti was found. More to the south stood other two temples of Aten. In the valley to the east of the city, Akhenaton and his court caved their tombs in the cliffs.