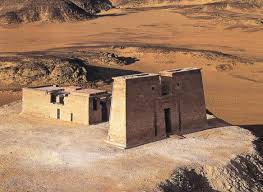 The Dekkah Temple is located about 100 kilometers south of Aswan High Dam in the Historical Nubia. It was moved to the site of el-Sebua, about 40 kilometers upstream, between 1962 and 1968, to protect it from the waters of Nasser Lake. The first works in the temple date back to the reigns of Hatshepsut and Tutmosis III, with aggregations of Nubian king, Akamani. But the actual building dates back to Ptolemy II Philadelphus.

The pylon of the temple is now separated from the remainder of the temple due to the missing enclosure walls of the open court. On the southern side of the temple, a small entrance leads into the interior of the pylon and to a stairway that communicates with several internal rooms. After the open courtyard, the facade of the pronaosis has reliefs depicting the King making offerings to various deities. The temple has two sanctuaries, one built by Arkamani and the second was added by Augustus. The temple was converted into a church by early Christians. In the neighborhood, the tourist can visit the temple of el-Sebua and the Temple of Maharraka from the Roman Era.

The Ruins of Khnum Temple At Elephantine Island

It is believed to have been built by Queen Hatshepsut of the 18th Dynasty. It lies on the south side of Elephantine Island. Khnum was one of the important gods of Ancient Egypt who, although not reaching the rank of a national god, was considered the manufacturer of man. In his circle of a potter, h

Agha Khan Mausoleum lies on a hill on the West Bank of the Nile, at Aswan. Here, Agha Khan III (1877-1957), the 48th Imam (or leader) of the Ismaili sect of Shiite Muslims was buried. He was a friend of the Egyptian Royal Family who used to invite him to spend the winter in Aswan every year. He fall

Because of the saturation of the Old Dam, which was raised two times after its inauguration, it was decided to build a new dam 6 kilometers to the south. The planning began in 1954 led by Nasser, just after the Egyptian Revolution. When The United States and England refused to finance the project th

The Unfinished Obelisk and the Granite Quarries

The Ancient Egyptians used to extract the granite used in the noble parts of their constructions (pyramids, sanctuaries, altars, statues, etc) from Aswan quarries. The Unfinished Obelisk, which still remains in situation attached to the rock on one side, is a gigantic single piece of granite that wa

On the road to the airport and Philae Island, and in front of the Nubian Museum, the tourist can see the Fatimid cemetery, which dates back to the 9th and 10th centuries, with tens of mud-domes of saints of this era. After the end of the Fatimid Khalifate by Saladin, the Shiite followers of this dyn

The City of Aswan lies on the east bank of the River while on the west bank, the desert almost touches the river interrupted some times by small villages and little spaces of cultivated areas. The biggest hill in front of the city, or (Qubbet el-Hawwa or Qubbet el-Hawa meaning windy dome), is full

Sarenput II was the Overseer of the Priests of Khnum and Commander of the Garrison at Elephantine during the reign of Amenemhet II from the XII Dynasty. Carved in the rocks of the hill on the western bank in front of the city, his tomb is one of the best preserved tomb

Herkhuf was an Overseer of the troops and campaign commander in Upper Egypt during the reigns of Pepy I, Merenre and Pepy II in Dynasty VI. The tomb is famous for Harkhuf's biographical text on the entrance and the copy of a letter that he received from the boy-king Pepy II asking Herkhuf to send hi

Mekhu and Sabni were father and son, both were governors of Upper Egypt during the reign of Pepi II of the 6th Dynasty. The reliefs on the walls of the tombs tell the story of the killing of Mekhu while he was on an expedition in Nubia and the efforts of his son, Sabni, to bring the body o

It lies sixty-two kilometers to the north of Aswan and it is one of the best well preserved stone quarries of the Pharaonic Era. Here, the Ancient Egyptians used to cut blocks of stones for the New Kingdom's chapels, chariness, statues, etc. The Greek and the Romans used these quarries as well. In t

The original site of the temple is the Island of Philae which disappeared under the waters of the middle lake between the Old Dam and the High Dam, after the building of the latter. Before the High Dam, and during the summer months, the Philae Island suffered every year from the Nile flood and visit

Outside the city, just south of Aswan High Dam and very close to the Kalabsha Temple, Beit (Beyt) el-Waly is found. This is not the original site of the temple, as like many other Nubian monuments. The temple was moved during the construction of the High Dam to save it from the waters of the Lake of

The island was given to Lord Kitchener as a gratitude for his services in the Sudan Campaign (1896-1898). Kitchener transformed the small island into a paradise of exotic trees and plants, and carefully planned walkways. Later, it became a property of the Egyptian Ministry of agriculture to be used

It is the largest island in Aswan. Since the Old Kingdom, the island has been considered a sacred place where god Khnum, who was the potter dedicated to the fabrication of the humans and their souls, lived. The island was always being considered a strategic site for all the Pharaohs as it was contro

Perhaps one of the most enduring images of Egypt is the Nile flowing by the veranda of the Old Cataract Hotel. The palace was built to offer an exotic and oriental atmosphere for the tourist. The hotel was constructed by Thomas Cook, the grand tour manager of Egypt. The hotel was opened in 1899, dur

The monuments of the old Talmis, which was the name of the original site of Kalabsha now disappeared under the waters of Nasser Lake, were moved to its present location at New Kalabsha (Challal) in 1970. Amenhotep II of the 18th dynasty founded the original temple, but the actual one was built by th

Kertassi Temple is located to the south of Kalabsha Temple near Aswan . It was dedicated to Hathor and Isis and it is one of the Nubian monuments that were moved, by the polish archaeological expedition, from the original site of Old Talmis to New Kalabsha to save them from the waters of Nasser Lake

The Monastery is located behind a hill, in the West Bank of Aswan, in front of Elephantine Island. It is usually visited by tourists taking a camel tour. The real name of the monastery is Anba Hadra. It was founded by an anchorite who was consecrated a bishop of Syene by Patriarch Theophilus (385-41

The Nilometer at Elephantine Island

The Nilometer at Elephantine Island, in Aswan was used since the Pharaonic Era to measure the water level of the Nile, up to the nineteenth century, thus allowing the determining of taxes the farmers had to pay and take measures in case of high or low floods. The Nilometer was always annexed to temp

The city of Aswan has an active cultural center in the Corniche devoted to the Nubian culture and music. Every night Nubian dancers and musicians perform typical dances, full of colors and rhythms, from the Nubian and the Egyptian Folklore

Aswan Market is located near the Nile river valley and offering you a unique pleasure to shop in Aswan. It is a heaven for all those who have come to shop from the different parts of the world where fruits, spices, vegetables and handicrafts mix in a dazzling lively symphony. Among the products you

The Nubia Museum was designed by the Egyptian architect Mahmoud al-Hakim and the Mexican architect Pedro Vasquez Ramirez who designed the museum's interior display. The museum was inaugurated in 1997, and won the Agha-Khan Award of Architecture in 2001. The total area of the complex is 50,000 square

Draw is a beautiful town situated south of Kom Ombo, in the governorate of Aswan. The town is famous for its camel market, where more than 2,000 camels, brought from Sudan in caravans that cross the desert in a 40 day road trip, are sold and bought. Generally on Sundays, this market becomes very liv

Wadi El Sebou Temple was built by Setau, Viceroy of Kush (Nubia) in honor of Ramses II. The name Wadi el-Seboua means the Valley of the Lions and comes from Arabic because of the sphinxes guarding the temple. It lies about 100 kilometers away from the city of Aswan and it was one of the relocated mo