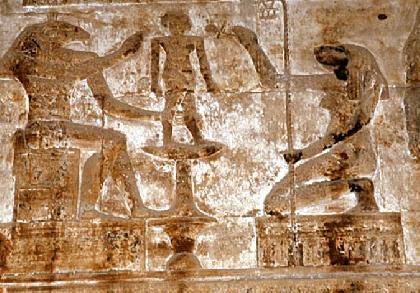 Khnum is one of the ancient Egyptian gods who had been worshiped many years before the Pyramid Texts and was worshiped many centuries after Christ but there is no accurate reference for the period of his worship in any of the ancient books. In the early years of his worship, Khnum was not regarded as a creator but after gaining more popularity and power he was regarded as the creator of the whole universe. Khnum was the head of the Triad of Elephantine Island of Phiala Island accompanied by his wife Satis that was known as "the dispenser of cool water coming from Elephantine" her water was used for purifying the dead and her sister Anuket that was known as the goddess of Lust. The usual depiction of Khnum is a ram-headed man with a scepter and an ankh in his hand. His head was always topped either with the crown of Upper Egypt with its plums, disk or cobra, or with a pot of water over the horns of the ram as a symbol for the Nile.

Khnum, The Creator of Gods and Human Beings

This myth says that Khnum created an egg on his potter's wheel and then the sun got out from it to enlighten the dismal and chaotic world. Some paintings on the walls of Luxor temples depict him while creating mankind as creating a child on his potter wheel and then putting it in the womb of his mother. This justifies calling him: the Mother of Mothers and the Father of Fathers".