The Bent Pyramid in Dahshur - Main Destinations in Egypt : Cairo, Much More Than a City : Pyramids in Giza : - 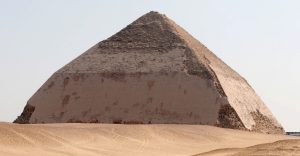 King Sneferu of the Fourth Dynasty built the Bent Pyramid on a square ground plan of l88 m in each side. The pyramid had two entrances, one in the northern side and the other in the western side, the function of which is not clear. The rising angle of the pyramid is 54°, but this angle did not correspond to the square ground plan. If the pyramid was to be continued with this angle, then it would have collapsed, especially that they actually started to notice some cracks, and started to fill them with gypsum. Thus, at the average middle height of 48 m, the rising angle changed into 43° 21 to save the pyramid.

- Inside the Bent Pyramid of Sneferu 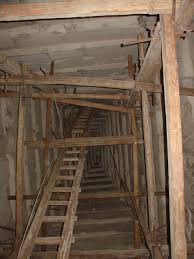 The Bent Pyramid of Sneferu has two unique internal structures, with entrances on the north and west sides. From the northern side, a long sloping passage, about 174m, leads to a narrow antechamber with corbelled roof. The burial chamber, also corbelled, is above this antechamber and was perhaps reached by a stairway or a ladder. The western entrance was discovered later after the northern one.

It runs from the west side of the pyramid through to the portcullis blocking systems, the passage leading to the portcullis systems measures about 1.65 m. The blocking system leads to another burial chamber with a corbelled roof. This is at a level higher than the first one. Between the two burial chambers, there is a passage (most probably built later) that connects them to each other.

The exact reason for having two entrances remains unrevealed, but a suggestion mentions that the western system may be a vestige (replica) of the south tomb of Djoser. The long passage also resembles the general south-west orientation, as in the First Dynasty's royal burial ground at Abydos.

- The Complex of the Bent Pyramid 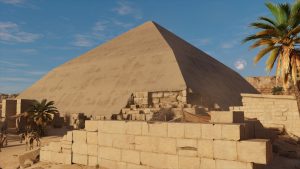 At the centre of the eastern side of the Bent Pyramid is a small chapel, like that of Meidum. Some scholars hold the belief that this small chapel represents the mortuary temple of the complex, while others suggest that it was merely a simple shrine and not the first phase of the development of the mortuary temples. It is also mentioned that these shrines served as cenotaphs in their pyramids.

Simple as it was, the chapel of the Bent Pyramid composed of two walls made out of Tura limestone. Within it was found an offering place within which was discovered a slap having the shape of hetep, a hieroglyph that meant "offering". A causeway, with walls of Tura limestone, ran from the pyramid complex to a small rectangular building often known as the valley temple. On the back wall were six statues of Sneferu, in front of which were two rows of five rectangular pillars. A court yard beyond had carved walls with the representation of the estates of the King.