Micherinos Pyramid in Giza - Main Destinations in Egypt : Cairo, Much More Than a City : Pyramids in Giza : - 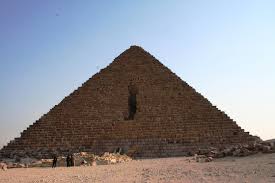 The third and smallest of all at Giza Plateau, the Pyramid of Menkaure is only one faced with granite in its lower section and fine limestone above. Built on a ground plan of 108.5 m at each side, the height of this pyramid is 66.5 m. The Pyramid of Menkaure (Micherinos or Mycerinus) was robbed, but in 1839 when the pyramid was opened and cleared, Perring found the remains of a mummy and a wooden sarcophagus probably from the funerary furniture. The sarcophagus of the King was made of basalt, and was decorated with paneling resembling the facade of the palace. Unfortunately, the sarcophagus together with the ship which was transferring it to England sank in front of the Spanish Coast by reason of a storm. The Valley Temple in Menkaure Complex was built of mud brick; and nothing inside it was built of stone except for some grounds and columns. Reisner discovered inside it a number triads made of schist, representing the King with goddess Hathor and one of the deities of the nomes, three of which are on display in the Cairo Museum.