Pyramid of Djed-Ef-Ra in Abu Rawash - Main Destinations in Egypt : Cairo, Much More Than a City : Pyramids in Giza : - 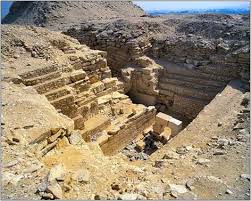 To the north of the Giza plateau, stands the Pyramid of Djed-ef-Re. King Djed-ef-Re, son of King Khufu, chose to build his pyramid 8 km to the north of his father's. The exact reason behind choosing this particular site remains not very clear; however, the choice of a site is usually according to reasons, either practical, religious or political. Considering the pyramids of one dynasty, such as those of the Fifth Dynasty, we find them distributed between Abusir, North Saqqara, and South Saqqara. Khufu himself chose a location for his pyramid different from that of his father Sneferu, who built at Dahshur. Likely, Djed-ef-Re found that the hill he chose is a suitable place to erect his pyramid on because it overlooks the valley. Additionally, some discoveries and burials of the First and Second Dynasties attest that the site was known since the pre-historic times. After the reign of Djed-ef-Re, and throughout the ancient Egyptian history, some parts of the site of Abu-Rawwash were used to cut some tombs in the rock. The pyramid was discovered in the beginning of the last century, and it was clear that the pyramid had a complex that consisted of: the pyramid, the mortuary temple, the causeway, and the valley temple. The excavations are still going nowadays to find out more about this complex. To the south of the mortuary temple, which is situated to the east of the pyramid, was discovered a boat-pit, cut in the rock. It must have contained a wooden boat, similar to the one that was discovered and was attributed to Khufu. The pyramid is now destroyed except for a number of stories of stone blocks, no more than 12 m in height; and it seems that there was a granite casing on it. At the end of the last century, some archaeologists and visitors of the site referred to the existence of another mud-brick pyramid at Abu-Rawwash, but no proof attesting this currently remains.