Pyramids in Giza - Main Destinations in Egypt : Cairo, Much More Than a City : -

Giza Plateau is the most important archaeological site in the world that locates on the western bank of the Nile River and few kilometers southward Cairo. It is one of the most admirable and most visited tourist sights all over the world because it houses the Great Pyramids of Khufu, Khafre (Khephren), and Menkaure and the Sphinx, in addition to a huge number of pyramids and tombs of the Royal Family, high officials, and workmen.

In addition, the site encloses Solar Boat Museum that dates back to 1954, when the charming solar boat was found. Excavation works for more treasures in the area of Giza Plateau and the surrounding areas are still going on. The pyramids discovered till now at the site are 11 in number.

To the east and west of the Pyramid of Cheops (Khafre), there are rows of tombs that belong to relatives of the Royal Family, courtiers and noblemen. This tradition of building the tombs of noblemen around the King's pyramid has an interesting function: there had been a strong desire to be buried next to their relatives so that they could share with them the afterlife in exactly the same way as during their lifetime. 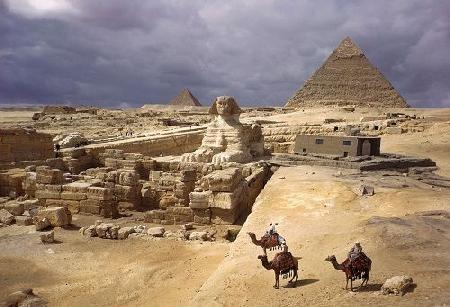 Sound and Light Show at Pyramids

The Open Theatre is located just in front of the Sphinx and it can be reached through  Village, almost near the end of the Pyramids Avenue. The sound and light shows are presented in different languages at each time slot. If you could not find the language you wish, they are still worth seeing as the impact of the pyramids illuminated by night is incomparable. The show consists of a recorded story by the grand figures of the Egyptian History, while a play of recorded music as well as of multiple lights is turning on and off.

More about Pyramids in Giza

The Pyramid of Amenemhat III (often referred to as the 'Black Pyramid') is located in Dahshur, in Giza. Now, the pyramid resembles a mound of rubble. Its core was built of mud bricks and encased in limestone. Most likely, the reason why it collapsed is because it lacks a stone core. The pyramidal

King Sneferu of the Fourth Dynasty built the Bent Pyramid on a square ground plan of l88 m in each side. The pyramid had two entrances, one in the northern side and the other in the western side, the function of which is not clear. The rising angle of the pyramid is 54°, but this angle did not

The Red Pyramid (also know as 'the Northern Pyramid') dates back to the Fourth Dynasty of the Old Kingdom. It was built by Sneferu, the father of Keops, after he had built the Pyramid of Meidum and the Bent Pyramid. This northern pyramid was built on a ground plan of 220 m in each side, with a ris

The original height of the mud-brick Pyramid of Amenemhat I at el-Lisht measured nearly 55 m. The pyramid's complex was built on two levels, unfortunately now mostly destroyed. It was similar to the Old Kingdom pyramids but smaller. The small limestone blocks which were used to fill its inner core

Originally, the Pyramid of Senusert I (also known as'the Southern Pyramid of el-Lisht) measured 61 m in height. It lies about 1.5 km from the Pyramid of Amenemhat I. Here, there were discovered the remains of the mortuary temple and the causeway, the walls of which were decorated with scenes and d

The White Pyramid of Amenemhat II, the first king of the Twelfth Dynasty, was so named because it was built of white limestone. Its Ancient Egyptian name was 'Sxm' ('The Mighty Pyramid). The extensive use of the pyramid as a quarry from which stones of good quality were taken for other constructio

To the north of the Giza plateau, stands the Pyramid of Djed-ef-Re. King Djed-ef-Re, son of King Khufu, chose to build his pyramid 8 km to the north of his father's. The exact reason behind choosing this particular site remains not very clear; however, the choice of a site is usually accor

The third and smallest of all at Giza Plateau, the Pyramid of Menkaure is only one faced with granite in its lower section and fine limestone above. Built on a ground plan of 108.5 m at each side, the height of this pyramid is 66.5 m. The Pyramid of Menkaure (Micherinos or Mycerinus) was robbe

Khafre is the builder of the second largest pyramid at Giza Plateau. The pyramid was built on a square ground plan of 215m, rising to a height of 143.5m at an angle of 53´10º. The simplicity of the chamber passage system may reflect the builder's experience in handling the probl

Cheops is the Greek name given to King Khufu and it means 'He who Protects me". It was King Cheops who chose the Giza Plateau (to the north of Dahshur) to begin the construction works of his own pyramid complex. Virtually, the Pyramid of Khufu –which stands over an area of near