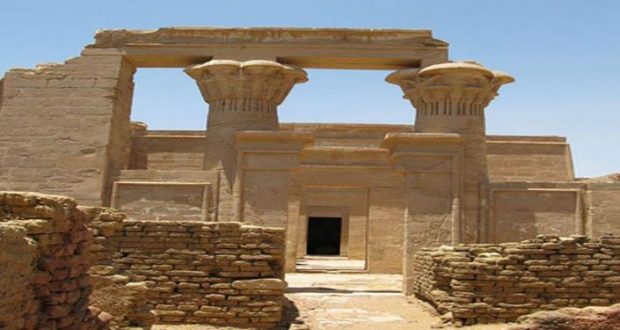 Built between 250 and 80 BC, Qasr (Kasr) El-Ghawita (Ghweita) lies about 17 km south from the city of El Kharga. The ancient name of the site is Per-Wsekh, which was a settlement famous for its wine. The temple, dedicated to the Theban Triad (Amun, Mut, and Khonsu), dates back to the Late Pharaonic Period, but it was rebuilt during the Ptolemaic Period. The fortress that encloses the temple, the remains of houses as well as the buildings of an old village all date back to the Roman Period. Though some of the temple's parts are severely damaged, its 10 meter high walls are nearly intact. The temple's plan consists of a sandstone gate, a courtyard, a hypostyle hall, an offering chamber with a staircase to the roof, and three sanctuaries. As for its depictions, scenes showing traditional offerings presented to the gods were found.

The Necropolis of El-Bagawat lies behind the Temple of Hibis in El Kharga Oasis. Built of mud brick, the cemetery comprises more than 260 tombs th

About 2 km from the city of EL-Kharga lies the well-preserved Temple of Hibis in an ancient city with the same name. It is by far the largest and

Planed by the Egyptian Ministry of Culture, the Archeological Museum in El Kharga Oasis was built from local bricks. Echo the architectural styl

El-Nadourah Fortress (Fort of Nadura) is an archeological site in Al Wadi Al Gadeed, just a little over a mile outside of the city of El Kharga. D

Dush is an archeological site in El Kharga Oasis, in the Western Desert of Egypt. Dush was a religious, military and civilian comple

Dedicated to the worship of god Amun, the Temple of Qasr El-Zayyan (Kasr El-Zayan) lies south of EI Ghawita Temple about 30 km to the s

One of the most impressive in the North Kharga, the fortress of the village of El Munira (north of El Kharga Oasis) lies about 20 km northeas