Muhammad Mahmoud Khalil Museum is located in Doqqui, near Cairo Sheraton Hotel. Built in 1915 in the French style, the museum was once a palace that belonged to Mohammed Mahmoud Khalil, a statesman, a cabinet minister and a Speaker of the Senate. The palace was the residence of Mohammed Khalil’s family and the seat of his invaluable art collection until 1960. In accordance with the will drawn up by the wife of Mohammed Mahmoud Khalil, the palace was inaugurated as a museum on 23rd July 1962 bearing the name of Mohammed Mahmoud Khalil and his wife Emiline Lock. The ground, first and second floors of the palace all are used as the museum’s gallery. The basement houses the administrative offices, the Library, the Information Centre and a big lecture theatre. Among the museum's exhibits is a collection of masterpieces of great Europeans mainly of the 19th century. However, the majority of the museum’s 208 works feature the Impressionist School. 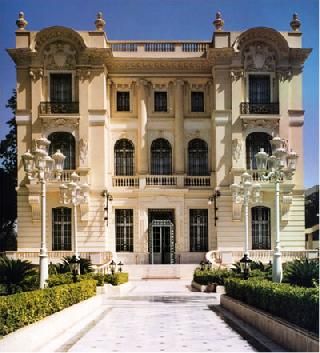 The great artists represented among the assets of Mohammed Mahmoud Khalil and his wife include Paul Gauguin, Auguste Renoir, Vincent Van Gogh, Claude Monet, John Jongkind and Charles Francois Daubigny. Additionally, the museum’s exhibits include large-size bronze, marble and gypsum statues skillfully made by great sculptors of the 19th century such as Auguste Rodin, Jean-Baptiste Carpeaux, Louis Antoine Barye and Charles Cordier. It also preserves a priceless collection of vases made in France, China, Japan and Iran, as well as a big collection of elaborately-made miniature works of art by Chinese artists in precious stones, crystal de Roch, emerald and coral. Moreover, there is a rare collection of small Japanese-styled boxes on display in the museum.

The Palace and Museum of Abdin locates in Abdin Square nearby the Mosque of Abdin and close to Sharia El-Saliba. There was a palace with a beautiful garden in this area but Khedive Ismail demolished i

The Agriculture Museum is located in the Mathaf Elzerae St, Agouza, Giza. Founded during the reign of King Farouk, the museum was housed in the Palace of Princess Fatma, daughter of Khedive Ismail and

The Museum of Egyptian Civilization was constructed in the early half of the 20th century in the reign of King Farouk. It is worth visiting for the marvellous collection of artifacts that date back to

The Museum of Gayer Anderson or the Bait of El-Kritliya lies in El Sayyida Zaynab Square nearby the mosque of Ibn Tulun. The monument consists of two houses: the one on the right that was constructed

Mahmoud Mukhtar was one of the greatest Egyptian sculptures whose house has been transfered to a museum for displaying his unique statues. The two-story museum encloses a large number of bronze, stone

Mostafa Kamel Museum was one of the prominent political leaders who affected greatly on the history of Egypt. The Museum of Mostafa Kamel is annexed to his mausoleum. Address: Cairo - few meters away

Railway Museum is one of the most visited museums that stands in Ramsses Street few meters away from the metro station and the railway station. Address: Ramses Street, station to Egypt or Mahatet Masr

The Egyptian Museum is a two-story Museum that was erected in 1900 with a unique neoclassical architectural style. The museum consists of 107 halls each of them encloses a rare collection of artifacts

The Mevlevi Museum locates in El-Helmia Street off El-Seyufia street. This Museum was established by the Italian Team who completed its infrastructure in 1810 while the ornamentation of the building d

The Military Museum locates within Saladin Citadel and contains a collection of weapons and costumes illustrating warfare in Egypt from ancient times. It was mainly a El Hareem palace established by M

Beit El-Ommah, or House of the People locates in El Mounira district in the city center. It was the house of the Egyptian Nationalist leader Saad Zaghloul who fouded the political party of Al-Wafd and

Resembling that of Madame Tussauds in some aspects, the small Wax Museum at Helwan is located in the suburb of Helwan, south of Cairo, near the mineral springs of Helwan and near Ain Helwan Metro stat

The Museum of Islamic Art lies in Maydan Ahmed Maher in the corner where Sharia Muhammad Ali joins Sharia Port Said. One can visit the museum any time except for Friday at the time of Noon prayer.This