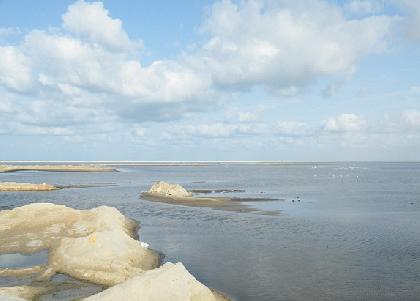 Zaranik protectorate is set along the Mediterranean coast of North Sinai at the eastern end of Lake Bardawil. It has been declared as a protected area around the year 1985 AD and is one of the largest in Egypt. It is characterized by its salty water which covers about seventy percent of its area and the rest is covered with dunes of sand. Moreover, it is a major destination for protecting migratory waterbirds which take shelter for food and rest during the autumn season, and thus it is considered an area of international importance. It is announced that Zaranik has hosted over two hundred and seventy species of water birds over the past years. It receives different threatened species of birds such as Pallid harrier, Corncrake and others. It also includes various species of mammals as well as different types of plants. The purposes for establishing the protectorate are the protection of natural resources available, preservation of biological diversity and more. In addition, there is Lake Bardawil located nearby and is privileged with containing some sea creatures like Loggerhead sea turtles and Bottlenose dolphin along with a small group of endangered Egyptian Tortoise. The lake is getting smaller in size due to the moving of sand, therefore, it is turning into a Sabkha. Although it is separated from the Mediterranean Sea, the seawater manages to fall into the lake and make its water salty. The Zaranik protectorate has become one of the famous areas which attracts various tourists from all over the world along with some researchers and those who are interested in studying environmental conditions. When you visit it, you will get to see fantastic sites, enjoy the beauty of nature and have a relaxing time.