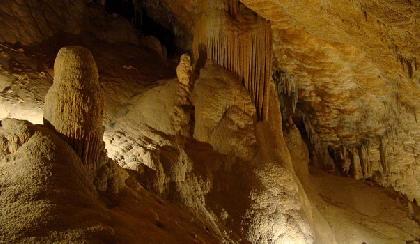 Wadi Sannur Cave is a famous protected area in the city of Beni Suef, Egypt and lies at about 200 kilometers from the city of Cairo. The cave was declared as a protectorate around the year 1992 AD, but it was discovered in the 1980s due to the occurrence of a burst of other quarries in the area during the search of workers for Alabaster marble. The cave features exceptional natural geological formations such as stalactites and stalagmites which glow creating a captivating scene that you will admire watching whenever the light enters the cave. These formations are the result of the distillation of water which has led to precipitation of calcium carbonate on the floor and roof of the cave. Moreover, the cave is made of limestone that is difficult to find in other places, and thus it has major importance and is considered one of the exceptional caves in Egypt for its rare formations. The protectorate contains one cave that covers an area of 700 meters, however, the surrounding area comprises many other caves related to different periods, including both ancient and modern ages. The Sannur Cave gives geologists and researchers a great opportunity to study, know more about the dominant conditions of the environment during ancient periods and discover other mineral resources in the cave or in the surrounding ones.