The Mausoleum of El-Afifi or Muhammad Tawfiq Pasha - Main Destinations in Egypt : Cairo, Much More Than a City : Mausoleums in Cairo : - 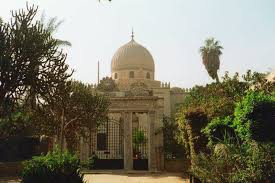 The Mausoleum of El-Afifi or Muhammad Tawfik Pasha locates in El-Suq Street nearby the entrance of the Complex of Qaytbay . This royal mausoleum was designed by the architect of the Khedival palace Fabricius Bey. It is called in that name because there is one of the saints called Sidi El-Afifi buried in an adjacent area and surrounded by a number of cenotaphs for some of the scholars and students of El-Azhar. The portal of this mausoleum that is placed in a garden enclosure is highly distinguished by its garlands and cornucopias that were commonly used in the Ottoman period. This mausoleum is worth admiration for its Ottoman baroque style and its furniture that was manufactured in the School of artisan of Lady Amine. In the center of the tomb stands the most remarkable cenotaph of Amine, the wife of Khedive Tawfik and the mother of Abbas II.

She was known as Umm El-Muhsineen or the mother of Charity since she was known for helping the poor people and establishing many places such as her Sabil in Sharia El-Saliba. Beyond Amine's cenotaph stands the one of Khedive Tawfik who assumed the power of Egypt in the period from 1879 to 1892. Then one can see the cenotaphs of Abbas Helmy who was ousted from the rule of the country in 1914,the one of the constructor of Qasr El-Manyal, Mohammad Ali , and the cenotaph of a young sister of Abbas II. In the garden and the crypt of the mausoleum, there is a number of cenotaphs for the members of the Royal Family including the one of Said Pasha who ruled in the period from 1854 to 1863. Those people were buried in the tomb next to the Roman amphitheater in Alex, but were brought to the family tomb after the destruction of their tomb.