Amoun Temple At Siwa Oasis - Main Destinations in Egypt : The Deserts and Oasis of Egypt : Siwa, The Hidden Paradise of the Desert : - 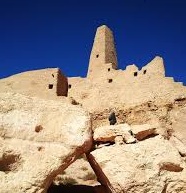 In the village of Agurmi, in Siwa Oasis, stands the Temple of Amoun, also known as the Temple of the Oracle. During the Persian occupation, the priests of Amoun pronounced a prophecy that a son of god Amoun will come and free Egypt out off the Persian hands. When Alexander the Great, who was on war against the Persians, knew about the prophecy, he seized the chance and declared he was the son of Amoun and came to liberate Egypt in c. 333 BC.

Visiting the temple, Alexander kneeled in front of the Statue of Amoun; thus, the Egyptians welcomed him and declared him Pharaoh of Egypt. The temple, built over a rock in danger of cracking, dates back to the Twenty-sixth Dynasty. In the Greco-Roman Period, some annexes were added to it. 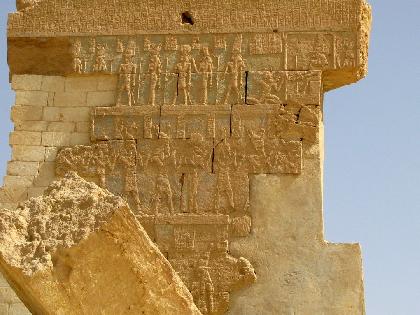 Over the rock, have survived the ruins of an old mosque, the Minaret of which still exists. A path leads to the rock's upper area, where one can behold the temple in the west-north corner. Lacking inscriptions, the façade leads to two halls that end with the sanctuary. Beside and around the sanctuary, there are small niches that probably served as storerooms or as the place where priests spelled the gods prophecies.

Only the sanctuary has reliefs that represent King Amasis, of the Twenty-sixth Dynasty, making offerings to 8 deities preceded by Amoun. A later governor of Siwa is also represented in the same position. In the west side of the sanctuary, there is a staircase that leads to the roof.

The Temple of Umm Obaidah lies within a group of palm trees, in the vicinity of the rock of Agurmi, where the Temple of Amoun (also known as the Temple of the Oracle) is located. In ancient times, bot

The Mountain of the Dead is located in Siwa Oasis, in the Western Desert, in the north-west of Egypt. It is an archeological site that compromises a necropolis dating back to the Late Pharaonic and th

El Dakrour Mountain is one of the most admired mountains in Egypt that locates to the south west of Siwa Oasis in Marsa Matrouh. It encloses two cemetries that date back to the ancient Egyptian times:

Shaly El-Qadima (Shali Al-Kadima) is the old Siwa, an archeological site that houses different remains and landmarks dating back to the Pharaonic and Roman Periods.