Temple of Alexander the Great - Main Destinations in Egypt : The Deserts and Oasis of Egypt : Bahareya Oasis : - 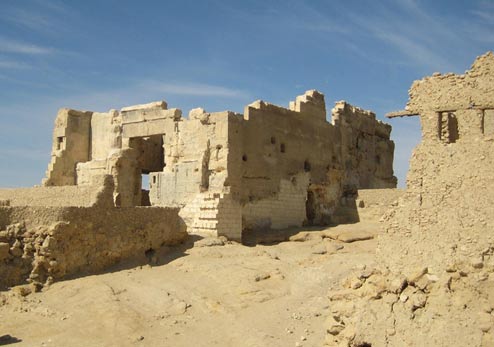 The Temple of Alexander the Great is located in El Bahariya, about three miles east the old capital of El Qasr (Al Kasr). Built by Alexander the Great, the temple was dedicated to both Amun and Horus. It is one of the largest temples in the New Valley (Western Desert), with more than 45 mud-brick chambers built with a layer of sandstone. The temple was built to commemorate Alexander's passing on his way to Siwa. When first discovered by Ahmed Fakhry, the temple's inscriptions and reliefs had vanished. However, restoration efforts have been exerted and the cracks between the stone blocks have been crudely filled with mortar. The remaining scenes in the temple represent Alexander the Great, as a King of Egypt in the traditional position of giving offerings to the Egyptian Pantheon, especially to Amun, Horus, and Isis. Around the temple, storerooms and a red granite altar were discovered.