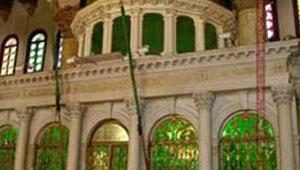 Sidi Galal El Din Al-Suyouti was born in cairo in 1445 AD and was raised as an orphan after his father died while he was only 5 years old. He memorized the Holy Quran (Qur'an) when he was barely eight. He began to immerse himself into knowledge and research when he was 15. Imam Jalaluddin Al-Suyuti was an Egyptian writer, religious scholar, juristic expert and teacher whose works deal with a wide variety of subjects in Islamic theology. Being the offspring of great ancestors renowned for knowledge and religious research, this Imam was known as Ibn al-Kutb (son of books). He adhered to the Shafi'ie Madhab. He kept himself in his house, busying himself with knowledge, research and writing until he caught a sickness that lasted for seven days, ending in his death. He died at 1505 AD (911 AH). He was modest, kind, righteous, fearful of God, satisfied with what sustenance he received from his scholastic life. The leaders and rich people would go to visit him and would present him with valuable wealth, but he would return it to them. An annual Mulid (birthday celebration) is celebrated at the Mosque of Sidi Galal El Din Al-Suyouti to commemorate the honorable Imam. People crawl to this celebration in great numbers from different places in Assiut.