Mosque of Al-Mujahedin - Other Destinations in Egypt : Assiut Travel guide : - 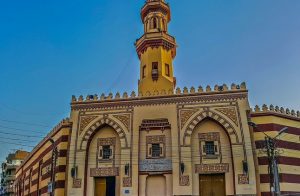 One of the oldest mosques in the Governorate of Assiut that dates back to the Ottoman Era, the Mosque of Al-Mujahedin was built on the ruins of a Mameluke mosque. It is considered one of the oldest high hanging Egyptian mosques. The façade was built of black burnt bricks surrounded by fine wooden decorations. A sign indicating the date of the mosque's construction date and founder hangs over the entrance. The Mosque of Al-Mujahedin (also spelled as Mugahedeen and Mojahedin) was modeled on the Ottoman style, with a massive quadrangular high Minaret distinguished with its fine decorations. The entrance of the mosque is decorated by wooden and stony paintings also distinguished by the Ottoman style.