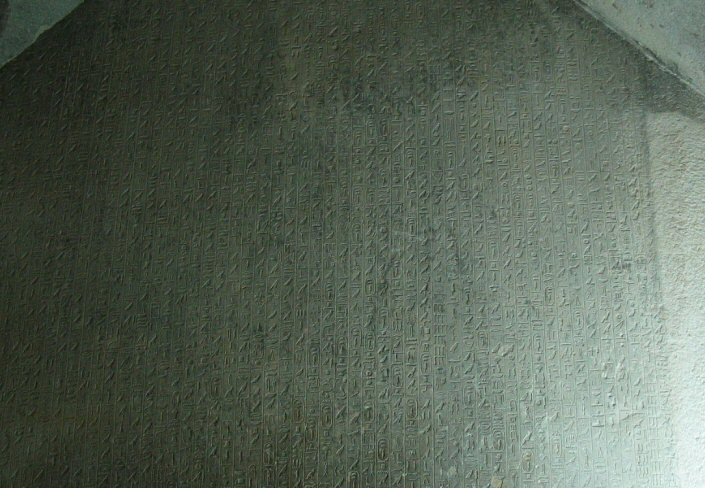 Mostly inscribed on walls of tombs inside pyramids, the Pyramid Texts are a collection of Ancient Egyptian religious texts from that go back to the time of the Old Kingdom. They depict the Egyptian view of the afterlife, and the ascension of the deceased king into the sky. The oldest known writings in the world that go back to 5000 years, the Pyramid Texts were written upwards. They are also the oldest collection of religious spells known from Ancient Egypt. The passages eventually evolved into the Book of the Dead, or more properly, the Book of the Coming Forth by Day. The collection of the Pyramid Texts forms the basis of much of the later religious theology and literature of Ancient Egypt. Varying selections of spells were carved in all the royal pyramids of the Old Kingdom, particularly the sarcophagus chamber and antechamber. There were some 227 spells in the Pyramid of Unas. Each subsequent pyramid ─though not containing the whole collection of spells─ provided fresh new additions.

These spells are called 'utterances' based on the belief that they were meant to be spoken by priests in the course of the royal mortuary rituals. They are usually numbered by their position within the pyramid, progressing from the burial chamber outward. The oldest of these texts come from that Pyramid of Unas at Saqqara. However, the first Pyramid Text that was actually discovered was from the Pyramids of Pepy I, Ibi, and Merenre I. Early analysts attempted to date the text as early as possible; even from the Pre-Dynastic Period. However, today, scholars place the text's origins with the date of the monuments where they reside. Nevertheless, it remains difficult to date the Pyramid Texts that they have aroused much speculation regarding their origin. This is because they were a variety of mortuary texts, without any precedent in the archaeological record. Since the texts were formed from a number of utterances with no common strict narrative sequence associating them together, scholars believed that some of them were not composed specifically to be inscribed in the pyramids. However, it was thought that they might have earlier uses. Proving this supposition are spells such as Utterances 273-4 (which is called the Cannibal Hymn, and which only appears in the Pyramids of Unas and Teti). Noticeably, these spells refer to aspects of the funerary cult that seem to have been no longer in practice at the time the pyramids were built. Not only were the texts carved on walls but also on the sarcophagus itself, specifically with the Pyramid of Teti. With the Pyramid of Pepy I, the carvings extended beyond the antechamber. Decorating walls of the Pyramid of Pepy II were 675 utterances. During the rule of Pepy II, texts began to be carved on walls of the tombs of queens, such as those of Queens Wedjebten, Neith and Iput. 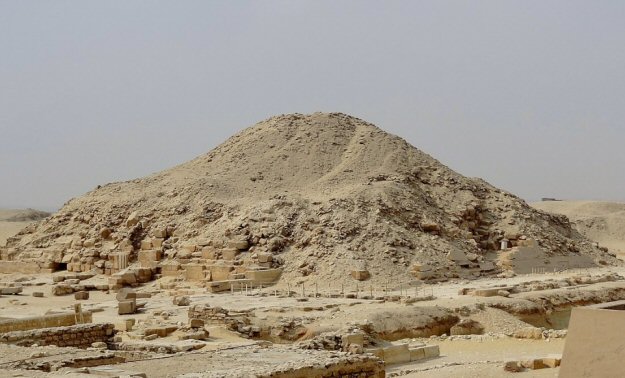 After the Old Kingdom, they even appeared on the walls and coffins of officials. When working on the Pyramid of Teti, Gaston Maspero discovered some passages of the Pyramid Spells. As early as 1882, he started publishing translations of the text, beginning with those of King Unas, the last king of the Fifth Dynasty. In 1899, Kurt Sethe also published some passages of the Pyramid Texts in his "Dictionary of the Egyptian Language". In 1924, Louis Spleleers provided another translation of these texts in French. Gustave Jequier had great additions for the texts during his investigation to some archeological sites at Southern Saqqara between 1924 and 1936. Examining reliefs in the Pyramids of Wedjebten, Neith, Iput and Ibi, Jequier advanced previous knowledge archeological had about the texts. He also added many spells from the Pyramid of Pepy II. In 1951, Jean Sainte-Fare Garnot and Jean-Philippe Lauer investigated the pyramids erected by the Sixth Dynasty Kings. Later both Lauer and Jean Leclant unearthed more than 2.700 spell passages from the Tombs of Teti and Pepy I. Samuel A. B. Mercer rendered a full English translation of the text in 1952, but it was superseded by a translation of Raymond O. Faulkner.

Additionally, it was after Sethe's death that his elaborate notes and translations were published, nearly between 1935 and 1962. As for the texts' length, they differ considerably. They were not illustrated and individual spells were not titled, except for Spell 355, the "Opening the Double Door of the Sky". The color that was used to outline individual signs was green— hopefully predicting the deceased's regeneration. Each column begins with a notation 'words to be spoken' (but in the Tomb of Unas, this appears only at the beginning of the passage as a whole). In all the pyramids, the spells were separated by a hieroglyph that stands for house, (with the sole exception of the Pyramid of Unas, where they are outlined by a horizontal line). The number of spells Sethe found is 714, while that of Faulkner is 759 (though with some duplicates). There seems no correlation with the text and the four coordinal points. Virtually, Egyptologists are not yet sure in which order the spells should be read. Sethe started with the north wall of the sarcophagus chamber. But, other scholars ─such as Siegfried Schott and Alexandre Piankoff─ thought the texts began at the entrance to the antechamber. It has been assumed that, for very specific reasons, the texts were selected from a larger collection of spells arranged according to a specific point of view. Actually, there is a considerable debate as to the actual use of both the texts and the associated rituals. The language in which texts were written is antiquated in comparison with other texts of the same period. Highly redundant language is also included. Notably, these texts stand as the earliest example of the retrograde writing, which involves a reverse of the order of columns. Noticeably, Ancient Egyptians avoided involving complete figures of animals and people.

It is believed that they did this fearing that such signs might cause harm if resurrected. The Pyramid Texts mainly focused on the King's resurrection and ascension to the afterworld. In some of the texts, the king boards the solar boat of god Re and passes in his journey through different areas in the sky, meeting several gods. Other texts mention that the king flies up as a bird (such as a falcon or a goose) towards the sky. At other times, the king's ascension towards the sky is done through climbing up the sky's ladder. All the texts meet in the emphasis on the deceased king's eternal life and the location of the sky as the realm of the afterlife. The Pyramid texts in general were thought to provide some services to the king in his journey towards the sky and in his reception in the world of the afterlife.

This is made, as the texts assure, through provisioning the deceased with all possible means including a ladder or ramp, clouds, storms hail, incense, sunlight, and boats. (On earth, the king had needed a boat to travel throughout Egypt along the Nile; in the next world, he would need a boat as well.) Among the gods who assist the deceased in the journey is god Shu, who carries up the sky. Certain answers that are needed to allow the deceased pass to the afterlife are also involved. Also included are some conversations with gatekeepers and ferryman where the king is given the specific knowledge that he will need in order to name the correct names. In the texts, there is the earliest known reference to Osiris as the Ruler of the Underworld. They indicate a strong association between the king and god Osiris, especially clear in spell 239 which also contains a reference to the Osiris Legend. Some references to almost all the myth's elements are to be found within this text. It provides a version of the contention of Horus and Seth. The myth of Horus, Isis and Nephthys searching for the murdered god (Osiris) is mentioned. Horus, the son of Osiris, manages to find his father's body and revives him. Not only myths but also some specifically ritualistic texts stand out. There are some references to the 'Opening of the Mouth' ritual. Although some are still unclear to us, some locations of great importance are involved in the texts, such as the Field of Offerings, the Field of Reeds, the Lake of the Jackal and the Winding Waterway.

Though the afterworld is celestial in nature, it is not a very desirable place to dwell. Even god Re himself does not prefer staying there; he waits the time before sunrise when he could taste freedom. The king is also violently driven to this place. Nevertheless, he navigates the waterways of the heavens by boat, which makes him dependent on the efforts of his ferryman. There texts include several references to different mundane topics. Some of the prayers call for food and provisions; some assert that the king will not lose the power of his limbs, that he will still move, breathe, eat, and copulate in the next world. Also included is a number of problems that can be encountered, among which are the attacks of various supernatural beings. For example, in spell 244, the "smashing of the red pots" intended to get rid with one's enemies.

The Book of Gates is the principal guidebook to the Netherworld. It first appeared in the tomb of the last king of the Eighteenth Dynasty. It was later found in the tombs of the Nineteenth and part of the Twentieth Dynasties of the New Kingdom. The book drives its importance from the role it played

The Book of Caverns appears to have originated in the Ramesside Period (the Twentieth Dynasty). Seemingly, this book, as an underworld book, emphasizes that previous texts had been too soft on those deceased who failed their judgment in the afterlife, while at the same time focusing on the rewards o

After the death of Akhenaten, signaling the end of the Amarna Period, a new set of books related to the afterlife emerged. These books centered on Nut (the sky goddess who swallows the Sun-god in the evening) only to give birth to him in the morning. During the day, the Sun-god passes visibly along

Ancient Egyptians had paid much attention to maintaining values of truth and justice and reducing the sins and faults that could upset their gods. They believed they would be judged for all their deeds and actions. The final and most challenging test of all, they believe, came when the dead person's