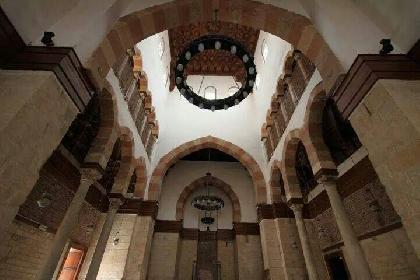 The Palace or Qasr Bashtak situates in one of the side street of El Muiz Le Din Allah Street next to the Qasaba . It was constructed by Emir Bashtak; the husband of Sultan El-Nasir Mohammed's daughter and one of the prominent Emirs at his reign. He was in charge of many influential posts including the Jamadar and his blazon appears as a diamond-shaped napkin over the façade of the building and the staind glass windows. The reminiscent of this palace highlight the beauty of the 14th century style of decoration. Of special interest among the remains of the palace are the stone slots over the arches that were used for holding the Mashrabiya screens, and the ceiling with its nice wooden patterns.

The façade of the palace has a remarkable Mashrabiya window and is surrounded by some stalls and their rents were given directly to the Emir. The entrance is handsomely ornamented with roundels on its two sides. From the entrance, one can find a vast courtyard with a flock of stair-steps leading to the Qaa or the reception hall of the palace in the second floor. The walls of the reception hall are nicely decorated with Mashrabiya screens allowing the women in the women department or the Haramlik to see what is happening in the lower base. In the center of the hall, there is a charming Fountain that was usually playing music for entertaining the guests. By the end of this hall, there are some windows overlooking the main street and other windows with stained glass that were used for decorating and illuminating the place. In the last quarter of the 20th century the palace was restored.

El Gawhara Palace or the jewel palace of locates in the Citadel in the western side of the Mosque of Mohammed Ali and nearby Bab El-Azab area in which the Castle Massacre took place. To the southern side of this palace stands the palace of El-Nasir Mohammed or Qasr El Ablaq . This palace was constru

El Manyal Palace was built early the 20th century as a residence for Prince Mohammed Ali Tawgik. It lies in El Roda Islanc on the eastern side of the Nile River. The palace stands in a garden enclosure that was supplied with a marvellous collection of trees and flowers. The palace stands as a two st

The Harem Palace or the women palace locates in the Citadel of Salah El-Din in Salah Salem Street. This palace was added to the northern enclosure of the citadel at the dynasty of Mohammad Ali and its entrance was placed in Bab El-Qallaa. It was used as a hospital for a period of time, but since its

The Palace of Muhammad Ali locates in Shubra El-Kheima next to the Faculty of Agriculture there. For visiting this palace, one can easily take the metro rather than a taxi. The palace was established by Mohammed Ali in the early years of assuming the power but its construction was completed many yea

The Musafirkhana Palace locates in Bab El-Nasr Street next to the Mosque of Mahmud Muharram . This palace was a part of a complex that comprises of a mosque, Tekiya, and palace that was erected by the wealth merchant Mahmud Muharram. This palace dates back to the Ottoman period and it was the center

Palace of Emir Qawsun in Cairo

The Palace of Qawsun lies in Sharia Manakh El-Waqf close to the Complex of Sultan Hasan . This palace was originally constructed by Emir Qawsun who was the husband of Sultan Hasan's daughter and he served as a Cupbearer in the days of Sultan Hasan. In the reign of Sultan Qaytbay , the palace was ren

The remains Qasr El-Ablaq lies opposite to the Mosque of El-Nasir Mohammad in Salah Salem Street. This palace was erected by Ashraf El-Khalil who died before finishing it and its construction completed at the reign of El-Nasir Mohammad. Standing over the remains of this stripped palace helps the one

The Palace of Alin aq lies in El Darb El Ahmar region in the north side of Bab El-Wazir Street. It locates nearby the Complex of Khayrbak and the remains of the Bahri Residence. The Monument was established by Emir Alin Aq El- Hossami who had been one of the prominent noble men in the days of the Ma

The Palace of Emir Taz appear in El-Seyufia Street. This palace was erected by Emir Taz who was one of Sultan El-Nasir Muhammad Mamluks and who was appointed later on as the Grand Dawadar. He became one of the administrating Emirs in the days of Sultan Hasan until Emir Shaykhu revolted against him.

The Qaa of Muhibb El-Din El-Muwaqqi situates in Bait El-Qadi Street next to the Mausoleum of Qalawun . In the period from 1730 to 1736 the house was inhabited by Emir Uthman Katkhuda El-Qazdughly who served as the Chief Emir in Cairo and who established a complex in Azbakiya. The Qaa or the main rec

The Remains of the palace of Qansuh El-Ghuri locates eastward Saliba Street. This Palace was established by Sultan Qansuh El-Ghuri,the last Mamluk sultan and the last Sultan who ruled for along period from 1501 to 1516. EI-Ghuri died of a heart attack while fighting the Ottoman Turks outside Aleppo,

The Sakakini Palace locates in El-Sakakini Square next to the Mosque of Baybars I . This palace was established by Henry El-Sakakini Pasha who came to Egypt at the age of 16 and worked hard until he managed to be a prominent contractor and occupy a great position in the country at the time of Muhamm