Abu Simbel is a small town located on the Western Bank of Lake Nasser, about 290 kilometers southwest of Aswan and only 50 kilometers away from the southern borders with Sudan. It has a small airport that serves the tourists visiting Ramses II and Nefertari Temples. The importance of the city is attributed to the existence of the two renowned temples of Nefertari and Ramsses II that date back to the Predynastic era. With the passage of time, the temples Abu Simbel were abandoned and the sand-storms covered them completely. From time to time, the wind removed the sand and revealed parts of the faces of the colossi of Ramses II. This created a sense of mystery, fantasy and fear among the local population and the Nomades. The discovery of Abu Simbel Temples began in 1813 when J. L. Burckhardt, Swiss Orientalist, found the top frieze of the main temple. He told Giovanni Belzoni, one of the most famous explorers in the world at that time, about his discovery. Belzoni traveled to the site, but was unable to dig out an entry to the temple. In 1817, the actual discovery of the temple happened when Belzoni returned to Abu Simbel and managed to at last enter the temple and took hold of all the portable objects he could transport. 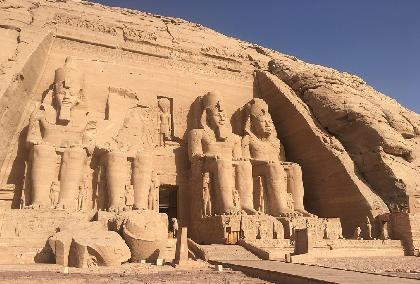 The Relocation of The Temples of Abu Simbel

By the end of 1956 and the beginning of planning the building of the new Aswan Dam, an international campaign led by the UNESCO was launched to save the monuments of Nubia. The relocation works the Temples of Abu Simbel began in 1964 and was finished in 1968 with a cost of 40 million $. To avoid damaging the sculptures, both temples were covered by sand. Then, the entire site - not only the temples - was cut into large blocks which were classified and numbered. They were relocated 200 meters to the back and 60 meters higher than their original place. The whole original site was reassembled in its new location, reserving the original orientation and the original landscape.

Amada Temple is located about 180 kilometers south of Aswan and it is also one of the rescued temples from the waters of the Lake Nasser after the building of the High Dam. The building of the temple, dedicated to Amun-Re and Re-Horakhty, was begun by Thutmosis III and his son, Am

Queen Nefertari was Ramses II`s favorite wife and consort. Some scholars believe that she was Nubian, and, may be, that is why Ramses II dedicated here, in Abu Simbel, a temple where she appears almost as high as himself. Here, on top of the 11 meter high façade, Nefertari i

The Great Temple of Ramses in Abu Simbel

The Great Temple of Ramses II is one of the most fantastic places in the world which is classified as a world heritage by the UNSECO. It was built by Ramses II who dedicated it to the national gods of Egypt: Ptah, Ra, Amun, and himself, Ramses II as a deified king, son of Ra. Besides Karna