Things to do in Abydos - Other Destinations in Egypt : Sohag Travel Guide : - 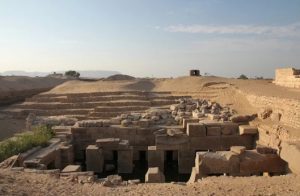 Once one of the oldest cities of Egypt, today Abydos (or 'Abdju' in ancient Egyptian) is a small town of Sohag Governorate, almost 180 kilometers to the north of Luxor and 480 kilometers to the south of Cairo, near the town of Al Balyana. Abydos city of Abydos was the cemetery of Thinis, the capital of the eighth Nome of Upper Egypt. It was believed that the first part of the legend of Osiris (the good god) and Isis (his wife, the magical goddess) occurred there, where Osiris' body was buried after Seth killed him. As a result of this belief, Abydos was, for many centuries, a city of pilgrimage of the Egyptian common and noble people where ceremonies were held commemorating Osiris' death and rebirth in the afterlife. Pilgrims came in great numbers to make offerings, erect stelae and statues and, some to build tombs. From the Predynastic Period, Abydos, as a sacred and blessed place, was a preferred place to burry the kings and governors of the people of Thinis. During the Pharaonic and Ptolemaic Periods, almost all the pharaohs contributed to the construction of temples and shrines in Abydos, but the most relevant surviving monuments date back to the Nineteenth Dynasty such as the temples of Seti I and Ramses II. In Predynastic and early Pharaonic Periods, the local deity of Abydos was Khentiamentiu (Foremost of the Westerners), but from the end of the Old Kingdom the cult of Osiris disseminated on a wide scale and Osiris became one of the most venerated gods of the country.

More about Things to do in Abydos

In the Dynastic Period, the temple's area was called Hefet-her-nebes, a phrase meaning that it lies "in front of its lord". It was so named because the temple of Seti I is located in front of the Temple of Amen at Karnak, directly across the Nile. From the temple, one can behold the Hypostyle Hall

Deir Amba Bishoy (Monastery of St. Bishoi) or Deir Al-Ahmar (Red Monastery) lies 4mi/6km to the northwest of Deir Al Abyad (White Monastery) in Suhag. Situated within a small village near Sohag, about 4 kilometers south-east of the Red Monastery. It is now enclosed on two sides by modern b

Deir el-Abyad (or the White Monastery in English) (also known as Deir Amba Shenuda or Shenute) is a Coptic Orthodox monastery. It lies about 4 kilometers south-east of the Red Monastery, some 15mi/25km north-northwest of Sohag (Suhag). It was named after Saint Shenouda (Shenute) the Archimandrite wh