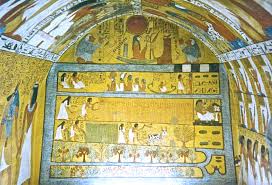 Sen-nedjem lived during the 19th dynasty, under the reign of Pharaoh Sethy I and the first years of Ramses II reign. He was probably buried in the chamber of his tomb around year 11 of the reign of Ramses, He was buried along with his wife Iy-neferti and his family: Sen-nedjem's parents in-law, brothers, sisters, and the children, in a tomb in the village necropolis; This permitted the production of a family tree and the ability to study the relations among these characters. The father of Sen-nedjem Khabekhnet had two wives (Tahennu and Rosu), likewise the son of Sen-nedjem Khabekhnet had (Sakh and Isis). It was also possible to draw up a list of the sons of Senn-edjem, and even to fix a chronological order of them "Teti, Khabekhnet, Bunakhtef, Rahotep, Irynefer, Khonsu, Ramesu, Anhotep, Ranekhu, Hotepu and Parahotep. We see amongst other things, that there were two called Khabeknet, respectively the father and son of Sen-nedjem.

The father of Sen-nedjem had a different title from that of his son, he was "Servant of Amun in the city of the South" Sen-nedjem himself, was "a Servant in the Place of Truth" or more completely "Servant in the Place of Truth to the west of Thebes", as were also his sons Khabekhnet and Khonsu. He lived with his wife Iyneferti in a house on the southwest corner of the village. Like others in the village, he built a tomb in the hillside nearby. The Place of Truth designates the Theban royal necropolis; all workers of Deir el Madina taking care of the royal tombs carry this title, Sen-nedjem was a tomb worker. He was in charge of building and decorating temples tombs and funerary furniture. He was one of the necropolis workers who was responsible for building and decorating royal Hathor, The hypothesis is that Sen-nedjem and his family could have been connected with the cult of Hathor, which would have given them a preeminence over the rest of the members of the community, This connection is indeed mentioned in the tomb of his son Khabekhnet. Sen-nedjem was buried along with his wife Iy-neferti and his family in a tomb in the village necropolis at Deir al Madina.

- History and Topography of the Tomb of Sen-nedjem The tomb was discovered on 31, January, 1886, and was excavated in 1917 – 1924 and again in 1928 – 1930, by Egyptian workers at Qurna. On February 1st, Maspéro accompanied by Bouriant, Acatalan diplomat and Edouardo Toda set foot on the terrain. The tomb, which bears the number (1) in the Theban necropolis as a whole, overlooks west, It is almost at the south extremity of the hill at the southern part of the village of Deir el-Medina, which is overshadowed by the Theban peak. The houses of Sennedjem and his family were close to their home-of-eternity, at the south-western corner of the village of Deir el-Medina. This part corresponds to an enlargement of the surrounding wall by Thutmosis I. The courtyard with dimensions of 12.35m x 9.40m, which was once closed from the east by a pylon, had at its west side, there are three chapels: those of Khonsu, Sennedjem and Khabekhnet (two sons of Sennedjem), each topped by a pyramidion. Inside the courtyard, a well shaft was leading to Sennedjem's vault, while the chapels of Khonsou and Tjaro had no underground chambers. Tomb No. l was directly facing the house which Sennedjem occupied in the new quarter which formed an extension to the south-west of the village of the tomb workmen, as they were called. Very little remains of Sennedjem's chapel except the door jambs at the entrance, on which were carved a formulae dedicated to Sennedjem, his wife and his sons Khabekhnet and Khonsu.

- The Plan of the Tomb of Sen-nedjem

A rectangular brick-lined shaft, with steps cut into its sides, descended towards the tomb. The tomb consisted of an entrance hall leading to an antechamber, which gave access through another shaft to the burial chamber. From the antechamber, a storeroom was reached through a sloping passage. Access to the entrance hall was concealed by a wooden door (now destroyed) at the bottom of the shaft to the west, the door was inserted in a sandstone door-frame, the jambs and lintel of which are now in the University of California's Anthropological Museum. At that time, Deir el-Medina presented a miserable aspect. Maspéro described the state of the place as follows: the site was previously inhabited by the Theban cemetery employees between the 18th and 21st Pharaonic Dynasties, then overrun by the Copts of the Byzantine era, It was at this time a chaos of ruins. After following such devastation, accompanied by ancient and modern plundering, the distressing aspect of the place was that of a battle field strewn in part with corpses and perforated by shell holes. It was that of funeral construction in ruins. In the tomb of Sennedjem itself, the men of Qurna, as not to damage the door (which was bolted from the inside), they broke the lintel and the door posts, thus causing an irrevocable damage at the entry of the hypogeum. When the two French scientists and the Spanish archaeologist arrived upon the place, they could only note the damage but on penetrating the chamber, they had the satisfaction to find it inviolate. This vaulted final room, constructed in brick and decorated richly with multicolored paintings, was filled with coffins, mummies, funerary objects and with piles of furniture.

- Decoration and Scenes of the Tomb of Sen-nedjem We have to mention that the tomb of Sennedjem is a painting tomb as it still keeps its vivid color on the walls of the tomb, which is decorated and surrounded by different scenes in painting form and colored in a very skillful way, also the funerary equipment are decorated with painting forms. The tomb and the funerary equipments reflect the development at the time of sendjem, and how the sculptures became very skillful.aa