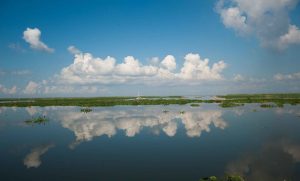 Ashtoum El Gamil Natural park is a small reserve located about 7km away from Port Said City. It was constructed on the Tannies Island, overlooking El Manzala Lake, in 1988 for protecting the rare species of animals and birds in that area. It is one of the preferable places for those who are interested in bird-watching activity since the area receives a large number of birds of magnificent flocks of immigrant birds especially in winter.

On top of the birds that visit the reserve in winter are Phalacrocorax carbo, Tadorna tadorna, , Fulica atra, Recurvirostra avosetta, and Ardea cinerea. anguilidae, serranidae, and sparidae. El Gamil Protectorate covers about 180 km² and is blessed with a marvelous coastal moderate climate and the annual rainfall on that area amounts about 75-150 mm. The most admired regions in this natural protectorate are Flora region with its magnificent collection of plants including phragmites and Potamogeton.

The Military Museum is situated in 26th July St, in the city of Port Said. It was officially inaugurated in 1964. One can see some of the exhibits on the museum lawn, including equipment from the 1956