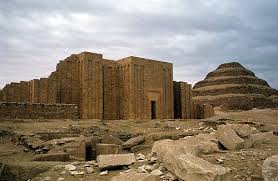 Some argue that King Djoser was not the first ruler of the Third Dynasty, although the archaeological evidence and the King Lists tend to suggest that he was the dynasty's founder. On the other hand, there are other reasonable grounds that suggest that the first Third Dynasty King had actually been Nebka.

Manetho tells of a priest of Nebka's mortuary cult, who had lived in Djoser Reign. Nebka and Djoser would have reigned simultaneously. Their parentage, however, is not documented, though it is possible that Djoser might have been either the brother or the son of Nebka.

According to some King Lists, however, Djoser was preceded by a king called Sankhet. Sankhet appears to have possessed large brick mastaba and to have been closely associated with Djoser at Beit-Khallaf in Upper Egypt.

Lauer indicated that Sankhet died young and that the mastaba– by adding another layer or more to which, a Step Pyramid was developed – was originally erected for him. Yet, another Third-Dynasty-type pyramid was discovered by Barsanti in 1900 at Zawiyt el-Aryan (midway between Giza and Abusir or few miles south of Giza), and it is known as the Layer Pyramid. This pyramid had been attributed to a king called Kha-ba whose name was found inscribed on stony vessels in the vicinity. 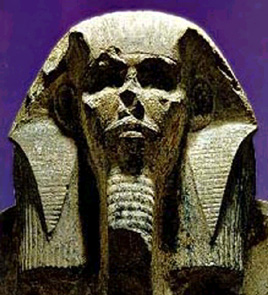 Djoser Reign drives its kudos from a glorious inscription on the Sehel Island, near Elephantine at Aswan. At Sehel Island near Elephantine, Ptolemy V (Epiphanes) had inscribed on a rock face, 2000 years after Djoser's death, a text which describes the action taken by Djoser to deal with the 7-year Famine Stele during his reign. King Djoser had been endeavoring to pinpoint the sources of the Nile flood and to perceive the role of ram-headed god, Khnum (Lord of the Cataract). He then makes an offering to Khnum, and the god appears to him in a dream, promising:

"I will cause the Nile to rise up for you. There will be no more years when the inundation fails to cover any area of land. The flowers will sprout up, their stems bending with the weight of the pollen."

Djoser's great funerary monument was in fact the first to be constructed wholly with stone. The royal tombs of the previous dynasties were brick mastabas with little use of granite and limestone. For that reason, Djoser was famous for inventing stone-built architecture with the help of his architect Imhotep. Thus, Imhotep had become an object of a popular cult.
Imhotep is thought to have lived until the Huni Reign, until the end of the Third Dynasty. He assumed many offices: high Priest of Heliopolis, Lector Priest, and Chief Architect. Fame, however, had driven from his post as an architect and he developed a reputation as one of the most striking personalities of his time. He was described in the literature of the New Kingdom as a patron of scribes, not because of his writing talent but because of his glory as a personification of wisdom and education. His intellectual faculties provided evidence for the offices that he probably assumed under Djoser Reign.

In fact, it was due to his achievements as a wise counselor (which was identical to those that made by Ptah), that Imhotep was described in the Turin Canon as the son of Ptah. The Geeks who knew him as Imouthes recognized his specialization in solving the medical problems and identified him with their own god of medicine, Asklepios. A cult of Imhotep was to spread from Alexandria to Meroe and even to survive the Pharaonic Civilization. Last but not least, his tomb is said to be located at Saqqara.

Memphis, the capital, was not an integral city until the Third Dynasty. King Djoser was the first king who settle down in Memphis, the centre of the civilization. Memphis was surrounded by a white wall called ́Inb-hd which means 'the White Wall'. It seems that the design of this capital was imitated later on to surround the Step Pyramid Complex at Saqqara, under the name of 'The Enclosure Wall'.

Djoser improved the capital city of Memphis devoting his attention to all aspects of life.

He also sent a great number of expeditionary units to Sinai for two purposes: to overcome the rebellions of Bedouins [punitive expeditions] and to bring stones and minerals from the mines.

In addition, other expeditions were sent to Nubia, for the purpose of supporting the Egyptian position there and frustrating any rebellions that could have been raised in Nubia.

He set up Gebel el-Silsilah as the country's southern frontier (60 Km north of Aswan).

Djoser Reign extended over 19 years, a seemingly short span of time in which he accomplished numerous achievements. According to Manetho, on the other hand, his reign lasted for 29 years.

The King Lists found at Abydos and Saqqara support the Turin Canon's figure of four rulers in the Third Dynasty, yet, there are differences in the names both give. 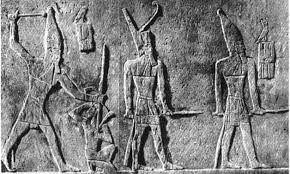 King Djoser was succeeded by his son, Sekhemkhet; some scholars, however, consider him to be Djoser II. It is easy to prove the identification between Sekhemkhet and Djoserti (Djoser II), because the Third Dynasty was marked by a change in the royal titles whereby the king's first name, which was usually given to a prince at the time of his birth, became the 'Golden Horus' name. In the Thinite Period, the king's first name had been the 'King of Upper and Lower Egypt' which was given at the time of his coronation. The Nsw-bity name became more closely associated with the Horus name.

He attempted to build a pyramid at Saqqara imitating his father's pyramid but died before completing it, possibly due to the bad economic condition. He ruled for a short time and left some inscriptions at Wadi-Magharah. Also we know of Neb-kau or Neb-kau-Re, who has to be accommodated in the list of the Third Dynasty rulers. He also built a pyramid at Zawiyet el-Aryan which was not completed. The architecture of this king's pyramid dates stylistically to the Third Dynasty or at least represents a revival of the style of that time, but whether this is considered sufficient to identify him with the Saqqara's King-List Nebkare or with one of King Huni's predecessors is controversial. 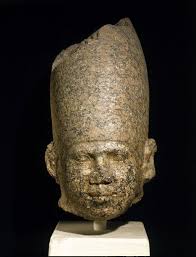 He was the last king in the dynasty, a fact confirmed by a literary text. This text is an instruction for the teaching of Kagemni, a contemporary of King Teti. Kagemni was a vizier and was eventually buried near Teti's pyramid at Saqqara. He had become a legendary figure since the end of the Old Kingdom, and his career was thought to have begun in Sneferu's reign. The text concludes as follows:

He ruled for 24 years. He was the first to build a true pyramid that was the Meidum Pyramid, which was completed by his son-in-law Sneferu. This is probably why this pyramid is sometimes ascribed to Sneferu. King Huni had no son, only a daughter called Hetep-heres. She got married to one of the genius military leaders called Sneferu, who became the founder of the Fourth Dynasty,and later, King Sneferu.

The End of the Third Dynasty 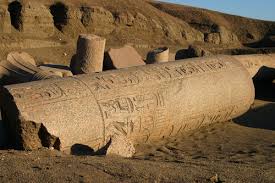 He is always referred to as the 'Successor of Huni'. His mother Meresankh was not royal-blooded, thus she was one of Huni's concubines. However, there is no definite proof for this, but if she was, her son would have married one of his half-sisters, Hetepheres I, (the mother of Cheops and another da

The country as a whole and its administration had not witnessed great changes in the beginning of the reign of Userkaf whose name means (powerful is His Ka). For instance, there are some of the Fourth Dynasty officials who remained in office, such as Nykaankh at Tihna, Middle Egypt.

With the rise of this dynasty, and especially at the time of Pepy I, the position of the priesthood of the Sun-god Re was still noticeable and also the priests of god Ptah raised in their prominence, to the extent that it has been suggested that King Teti, the founder of the Dynasty, came from Memph

At the beginning of the Third Dynasty, the Egyptian monarchy had developed a theological dimension, with the adoption of two new names among the King's titles, namely, that of the 'Golden Horus'

Heliopolis or the city of sun, as the Greeks called it, is an ancient Egyptian city that was called by the Egyptians Annu. It was erected by the priests of Ra as a religious capital of Egypt that included a temple for Ra and college with a great library. The historians say that many great thinkers l