Visiting The Wikala of Sultan El-Ghuri - Main Destinations in Egypt : Cairo, Much More Than a City : Wikiala or Historical Markets in Cairo : - 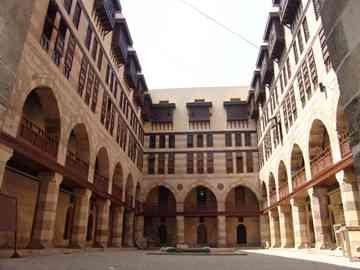 The Wikala of El-Ghuri situates in El-Sheikh Mohamed Abdu Street some meters way from El-Ghureya Complex and El-Azhar Mosque. The Wikala means a commercial center visited by a large number of people to sell and buy there. The architectural style of the Mamluk Wikala was usually consisting of a building of two stories: the first one for the animals and goods of the merchants, while the second was including the merchant's inhabitance rooms. This Wikala was established by Sultan Qunsuwa El-Ghuri and was famous for trading in imported spices. This Wikala is one of the few remaining Wikalas in Cairo since most of the Wikalas disappeared now. It is admired for its handsome Mashrabiya windows hanging down from the second floor overlooking the street and its square lines. The Wikala still exists as a strong building and is used as a cultural center.

The Wikala of El-Bazara locates in Bab El-Nasr Street westward the Mosque of Ustadar . This Wikala was one of the major commercial centers and was famous for trading in coffee, wood and soap. It was r

The Remains of The Wikala of El Tutngi lies in El Alfi Street off El Saliba Street and next to the Sabil-Juttab of Abbas Agha. This Wikala dates back to the ottoman period but the major part of it dis

The Wikala of Emir Qawsun situates in Bab El-Nasr Street nearby the Mosque of El-Hakim and it was the located in the northern boarders of the Fatimid Cairo. It was established by Emir Qawsun who was o

The Wikala of Sultan Qaytbay locates in Bab El-Nasr street few meters away from the Tomb of Ahmed El-Qazid with its fascinating ribbed brick dome. It traces back to the first half of the 15th century

The Wikala and Sabil-Kuttab of Gamal El-Din El-Dahabi lies in one of the side streets off El Muiz Le Din Allah Street called El-Maqasis and next to the Mosque of Shaykh El-Mutahar . Although the major

The Wikala and Sabil-Kuttab of Nafisa El Bayda lies in Maydan El-Metwalli next to the Mosque of El-Muayyad Shaykh and Bab Zuwayla . The complex was constructed by Nafisa Bayda who came to Egypt as a s