Sun Boat Museum in Giza - Main Destinations in Egypt : Cairo, Much More Than a City : Museums in Cairo : - 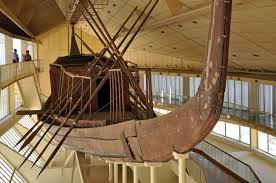 To the south of the pyramid were cut places for the wooden boats. These boats were intended for the use of the king in his journeys during the day time and at night with the sun-god Re as well as for crossing rivers and lakes of the hereafter. The actual boat, now in exhibition in a special building beside the Great Pyramid, was discovered in 1954. It was found dismantled under limestone blocks and plaster. Also found were the ropes for rigging and matting. The process of reassembly took more than 10 years. The boat is 44 m long and 6 m wide with an estimated displacement of more than 45 tons. Hundreds of pieces of shaped wood comprise the hull which was held together with ropes. 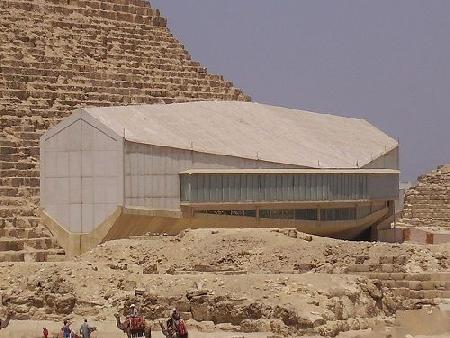 Since wet wood swells and rope shrinks, the boat would become water tight in water, making caulking unnecessary. The boat had six pairs of long oars, one pair by the stern post serving as rudder oars. Discoveries revealed 3 pits for these boats located to the east of the pyramid. In 1954, two other pits were found to the south of the pyramid. Cheops' boats were not the earliest to be found. Rather, these boats were found buried in Saqqara and Helwan from the First Dynasty. 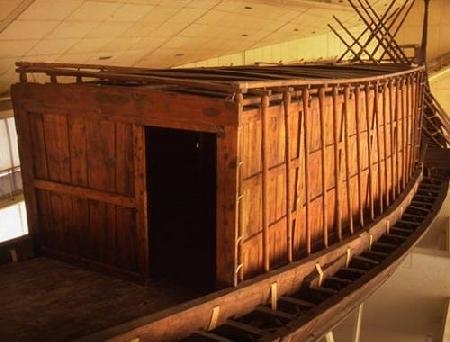 The name 'Solar Boats' arises a number of questions since no evidence is found to prove that it was one of the boats used in the solar journey, whereas there is more than one evidence to prove that the boat was one of the seven or eight ones mentioned in the Pyramid Texts connected with the journey of the king after his death in the hereafter. Besides, solar boats were shown with certain religious symbols. Yet, all this was not found in the discovered boat.

The Palace and Museum of Abdin locates in Abdin Square nearby the Mosque of Abdin and close to Sharia El-Saliba. There was a palace with a beautiful garden in this area but Khedive Ismail demolished i

Muhammad Mahmoud Khalil Museum is located in Doqqui, near Cairo Sheraton Hotel. Built in 1915 in the French style, the museum was once a palace that belonged to Mohammed Mahmoud Khalil, a statesman, a

The Agriculture Museum is located in the Mathaf Elzerae St, Agouza, Giza. Founded during the reign of King Farouk, the museum was housed in the Palace of Princess Fatma, daughter of Khedive Ismail and

The Museum of Egyptian Civilization was constructed in the early half of the 20th century in the reign of King Farouk. It is worth visiting for the marvellous collection of artifacts that date back to

The Museum of Gayer Anderson or the Bait of El-Kritliya lies in El Sayyida Zaynab Square nearby the mosque of Ibn Tulun. The monument consists of two houses: the one on the right that was constructed

Mahmoud Mukhtar was one of the greatest Egyptian sculptures whose house has been transfered to a museum for displaying his unique statues. The two-story museum encloses a large number of bronze, stone

Mostafa Kamel Museum was one of the prominent political leaders who affected greatly on the history of Egypt. The Museum of Mostafa Kamel is annexed to his mausoleum. Address: Cairo - few meters away

Railway Museum is one of the most visited museums that stands in Ramsses Street few meters away from the metro station and the railway station. Address: Ramses Street, station to Egypt or Mahatet Masr

The Egyptian Museum is a two-story Museum that was erected in 1900 with a unique neoclassical architectural style. The museum consists of 107 halls each of them encloses a rare collection of artifacts

The Mevlevi Museum locates in El-Helmia Street off El-Seyufia street. This Museum was established by the Italian Team who completed its infrastructure in 1810 while the ornamentation of the building d

The Military Museum locates within Saladin Citadel and contains a collection of weapons and costumes illustrating warfare in Egypt from ancient times. It was mainly a El Hareem palace established by M

Beit El-Ommah, or House of the People locates in El Mounira district in the city center. It was the house of the Egyptian Nationalist leader Saad Zaghloul who fouded the political party of Al-Wafd and

Resembling that of Madame Tussauds in some aspects, the small Wax Museum at Helwan is located in the suburb of Helwan, south of Cairo, near the mineral springs of Helwan and near Ain Helwan Metro stat

The Museum of Islamic Art lies in Maydan Ahmed Maher in the corner where Sharia Muhammad Ali joins Sharia Port Said. One can visit the museum any time except for Friday at the time of Noon prayer.This