In Esna, Nile cruises and cargo ships have to cross two barrages. The old one, built by the British in 1906, is now obsolete, and always open because it was substituted by the Electricity Bridge built in the 1990s. This last was expanded with one lock more facilitating travel and saving the time of crossing it

The Old Mill of Esna is located in the covered souq east of the Temple of Khnom. It presses lettuce seed into oil. It is one of the most important sightseeings in the city to which a great deal of tourists pay a visit. Its construction goes back to the 9th century. Measuring 1.50 meter long, the mill consists of two huge granite stony blocks between which seeds are introduced. A camel keeps pulling the stones clockwise for several times. Then, the seeds are placed into containers of fronds that will be pressed till oil comes out of them. After oil is gathered, it is to be transferred into a well down the mill. Remarkably, the Pharaohs were the ones who initiated this method of grinding seeds and extracting oils and liquids. Although much has been introduced in the industry of grinding seeds, the mill is still at work. 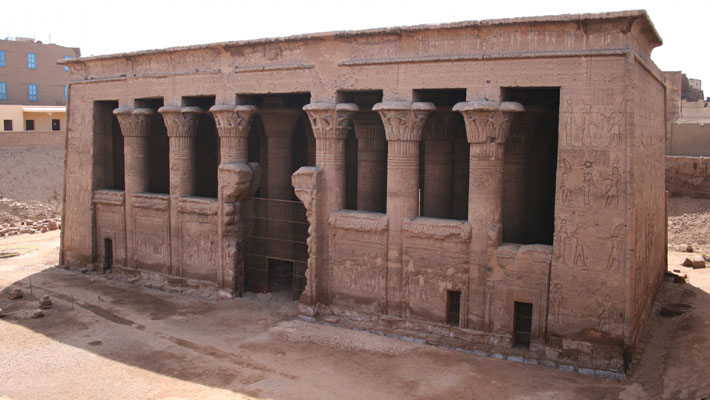 The major part of the original Temple of Khnum (Khnom) lies now beneath Esna's houses and a big part of its blocks where used as a construction material. The only surviving section from the temple is the Hypostyle Hall. This hall can be reached through the Nile Bank, by crossing the city's handicraft market and using a staircase (as it lies 9 meters deep). The temple was begun in the reigns of Ptolemy VI Philometor and Ptolemy VIlI Euergetes II, and remained in use through the Roman Period. It was dedicated to the Triad of Khnum, Neith, and Hak. In 1840, the temple was excavated by the Egyptian army, and was cleaned later by the Antiquities Service. It is unlikely that further excavations could be performed since these operations will require the evacuation of inhabitants from many houses and shops of the modern city. The Hypostyle Hall has eighteen columns that support a roof decorated with astronomical scenes vultures. On the temple's walls are depicted figures of rams and crocodiles representing Sobek and Khnum (also known as Khnom, Khonom and Khonoom). Check and jowl are depictions of traditional scenes that represent the king dedicating the temple to god Khnum. On the columns, other scenes of presenting offerings to various Egyptian deities are gracefully and vividly drawn. To the right, appears an interesting scene of Commodus and Khnum in a papyrus thicket and pulling on a net full of fish and game birds.