Coptic Museum in Cairo - Egypt History, Where the whole story begins : The Copts in The History of Egypt : - 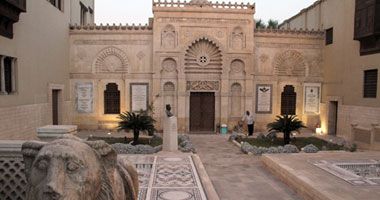 The Coptic Museum includes some rare pieces of art that date from 300 to 1000 AD and are considered as the best collection of Coptic art all over the world. The museum was established by Marcus Simaika in the early part of the 10th century, thus it is regarded as the oldest museum in Cairo. The main door of the Museum has a graceful limestone façade that resembles the one of the Mosque of El Aqmar . This is an evocation of the creative relationship between the Copts and their Muslim rulers during the Fatimid period. Upon entering, turn right and continue past the limestone sculptures into a small garden courtyard. Climb the stairs at the eastern end for access to the old wing of the museum and its wonderful collection of wood furnishings: ceiling panels, Mashrabiya screens, pieces of furniture, and inlaid doors. Of special note is the sanctuary screen of sycamore wood from the Church of Saint Barbara. The panels, with human and animal figures against a foliate arabesque background, are recognizable as having been crafted in the Fatimid period, in the eleventh or twelfth century.

One enters the new wing, built in 1947, by turning left at the entrance. The collection shows how many styles and themes, such as geometric designs, and scrolls of acanthus and vine leaves, and friezes, inhabited by rabbits, peacocks, birds, and rural activities, passed from the Hellenistic and Coptic legacy into the Islamic artistic vocabulary of Egypt. It is most likely that the niche in the Christian monk' cell that oriented him in prayer toward Jerusalem inspired the shape of the mihrab in an Egyptian mosque, and that the stair shape of the Egyptian minbar was derived from the pre-Islamic Coptic pulpit.

The exact date of the origin of the Coptic calendar is unknown, but it is believed that Imhotep, the supreme official of King Djoser C.2670 BC was the one who first created the old Egyptian calendar, thus it is the oldest in history that was originated three millennia before Christ. The Eg

The Holy Family in Egypt

The flight of the Holy Family to Egypt: "And when they [the wise men from the east] were departed, behold the angel of the Lord appeareth to Joseph in a dream, saying, Arise, and take the young child and his mother, and flee into Egypt, and be thou there until I bring thee word; for Herod