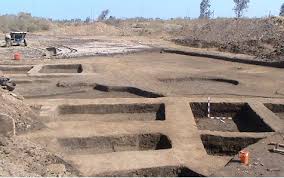 Leontopolis is the Greek name of the Ancient Egyptian city of Taremu (which means "Land of the Fish"), now known as Tal El-Moqdem (Tell al Muqdam). It is also referred to as Leonto, Leontos Oppidum, and Taremu. This city ─which was the ancient capital of the 11th Lower Egyptian Nome─ is located near the city of Banha, in the north-east of the country. The remains of the city's different constructions extend over 30 hectares. The city was prominent during the Ptolemaic Period and was probably the center of a powerful Delta kingdom during the Third Intermediate Period (about 1069 through 664 BC). The Greeks named it Leontopolis (which means "City of Lions") because the city had a temple dedicated to the lioness goddesses: Bastet and Sekhmet. Here, many amulets with the shape of a lion were unearthed, which indicates that it was a place where the cult of the local lion god Mihos or Maahes (a lion prince and son of Bastet and Sekhmet) was strong. Discovered in the area were a temple for this local deity on the eastern part as well as a number of bronze inlay statues with his shape. Additionally, the city had a Jewish temple erected during the reign of Ptolemy VI Philometor (180-145 BC), of which only few remains have survived. Founded by the exiled Jewishpriest Onias IV, this temple was modeled after that of Jerusalem. In general, the remains found date back to the Roman, Greek, Persian and Saite Periods, and include domestic, industrial, monumental and possibly cult elements. Small items that have been discovered include erotic figurines, mostly male, a number of terra cottas, glass, amulets, including a wadjet eye mold, stamped jar handles originating outside of Egypt, a few sculpture fragments and many potsherds. Besides, C.C. Edgar discovered the undisturbed sarcophagus of Queen Kama which was found full of jewelry, silver pectorals, and amulets

Ancient Hut-hery-ib (Athribis or Athribite) is an ancient city that dates back to the Old Kingdom period. Today, it is called Kom Sidi Youssuf. The city's remains are located in the area of Tell Atrib, near Benha, about 50 km from Cairo. It was once the capital of the tenth nome. Different kings fro

The Irrigation Museum in the city of El Qanater El khairia comprises models of the irrigation systems, methods, techniques and equipments that had been used since the Pharaonic Period up to our times, a collection of illustrative three- dimensional maquettes of the High Dam and of all bridges constr