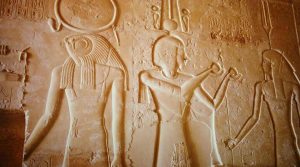 King Seti II (or Sethos II), Son of King Merneptah and Queen Isetnofret, was the fifth or the sixth ruler of the Nineteenth Dynasty who reigned from 1203 - 1197 BC. The royal succession and the temporary usurpation of the throne by Amenmeses made his reign a confusing and brief one. His throne name, Userkheperure Setepenre, meant "Powerful are the Manifestations of Re, Chosen by Re.". His wife is Tausert, the owner of Tomb KV 14 which lies few meters away from his tomb. Seti II's tomb was dug in the southwestern corner of the Valley of the Kings and its total area measures about 298.11 m². It has been open since antiquity, as Greek and Latin graffiti show, but it was cleared in the early 20th century by Howard Carter. The tomb consists of an entryway corridor followed by three long corridors, in turn followed by a well room. The well room then communicates with a four pillared hall and then a makeshift burial chamber, where the King's sarcophagus was located.

- Architecture of the Tomb of Seti II

The plan of the tomb is simply abbreviated because it was never finished. What was originally a corridor beyond pillared chamber F was unexpectedly converted into the burial place of Seti II. Also, it is not surprising, that planning for the king's burial was an unpredictable undertaking, as that time was of a chaotic environment.

Corridor B of the Tomb of Seti II: Figures of Ma'at decorate the gate which leads into Corridor B. On the left wall, there are scenes for Seti II making offerings to god Ra-Horakhty and Nefertum. On the right wall, we can see the opening scene of the Litanies of Ra followed by columns of its text. The ceiling is decorated with colored panels showing vultures with wings spread. These scenes tell us how the artists was very skillful in curving and painting the royal tomb. Corridor C of the Tomb of Seti II: At the beginning of this corridor, King Seti II offers a small figure of Ma'at to Re-Horakhty on the left wall, and on the right, he offers incense to Sokar. Both walls, the left and right, are decorated with the Litanies of Ra. In the upper register of each wall, the seventy-four forms of Ra are shown, as well as scenes from the Imydwat. On the ceiling, a sun disc with the ram-headed Ba-bird of Ra, is flanked by figures of the two goddesses Isis and Nephthys. In this corridor, one can see hasty corrections to spelling and paleography made by ancient scribes. Corridor D of the Tomb of Seti II On both the left and right wall of Corridor D, there are the fourth and fifth hours of the Imydwat.

- Chambers E and F of the Tomb of Seti II 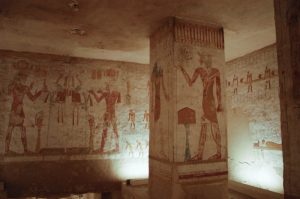 Chamber E of the Tomb of Seti II (KV 15): After passing through Corridor D, we will be in Chamber E, the upper part of the walls in this chamber is decorated with images of divine statues, and then filled with thick yellow ochre. The royal cartouches appear in light blue paint. Chamber F of the Tomb of Seti II (KV 15): It is a four-pillared chamber with a central descent. It is decorated with scenes from the Book of Gates. On the front and left walls, there is the fifth hour; on the front, rear, and right walls there is the sixth hour; at the center of the rear wall there is a double scene of the King making offerings to Osiris. Some scenes around the pillars are depicting the King with god Ptah. The god stands in a shrine whose woven basketry walls are hastily drawn.

- Burial Chamber J and the Sarcophagus of Seti II

The Burial Chamber (Chamber J) of the Tomb of Seti II (KV 17) was at first a normal corridor but it was adapted as a burial chamber with almost no alternation to its plan. On the left and right walls, there are scenes of the sixth hour of the Book of Gates. The ceiling of the chamber is painted with a large and unusual figure of goddess Nut. This chamber houses the red granite sarcophagus of King Seti II, which lies broken in the floor. This sarcophagus is considered to be the smallest of any New Kingdom sarcophagus ever discovered. On top of this sarcophagus is an Osirian representation of King Seti II, and goddess Nut stretches across the reverse side. The top of the lid is missing, along with the face of the King, but the head of the goddess Nut is now displayed in the Egyptian collection at the Louvre in Paris.