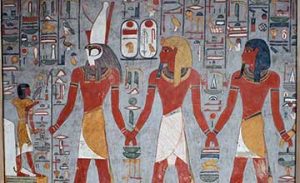 King Ramses I is the founder of the Ninth Dynasty and father of Seti I. His reign only extended over two years, since he came to the throne as an old man after a career in the army under the reign of King Horemheb, the last ruler of the Eighteenth Dynasty. The Tomb of Ramses I, which is one of the smallest in the Valley of the Kings, is related to this short period of rule. It is located in a small valley perpendicular to the main wadi (valley). The discovery of the tomb is attributed to the Italian explorer, Giovanni Belzoni, who discovered it on October 1817. A small tomb was carved for Ramses I to contain only the barest requirements of a royal funeral, a tomb that could be completed quickly, and its plan has to be of the abbreviated one. Also the King's sudden death pushed the architects of the tomb to finish it as quickly as possible.

- Decoration of the Tomb of Ramses I 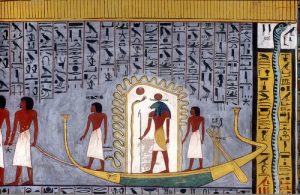 This tomb is considered to be the smallest royal tomb in the Valley of the Kings. The tomb is similar to that of Hormoheb (KV 57). This is so clear especially from its decorative style and the use of grayish-blue as the background color for the scenes and texts. Some Egyptologists believe that the same artists were responsible for the decoration of both tombs. The burial chamber J and a small niche beyond are the only decorated parts of the tomb. On the right wall, there is a scene from the third hour of the Book of the Gates. We can see the solar bark carrying a ram-headed figure of the sun god. The shrine of the sun god is protected by a snake called Mehen, and by the gods Sia and Heqa. The bark is about to travel through the long tube. Then in the register below, God Apophis poses a potential threat to the sun god but is stopped by Atum and nine other deities.

On the front wall, the goddess of Justice Ma'at greets the king as he enters his tomb. Behind her, the king stands with the gods Ptah and Nefertum. On the rear wall, there is a single register which includes a finely depicted figures of Atum-Ra-Khepri and Osiris, seated on thrones. Iwnmutef, a priest stands before Osiris, preparing to receive Ramses I, who is being led by Horus, Atum, and Neith. Then Atum-Ra-Khepri receives another figure of Ramses I, who presents the god with four caskets of cloth. To the right, above the entrance, we can find a kneeling figure of Ramses l who is joined by the Souls of Pe (Buto) and Nekhen (Hierakonpolis) in adoration of Osiris. On the left wall of the Burial Chamber, we have the fourth hour of the Book of the Gates which begins with a representation of the gate in the left corner, protected by a snake drawn vertically. Then the solar bark is towed toward nine shrines in which nine mummies lie, awaiting resurrection by the sun god. Moving to the lower register, we can see a huge coated snake representing the passage of time, watched over by twelve goddesses who represent the twelve hours of the night.

- The Burial Chamber and the Sarcophagus of Ramses I 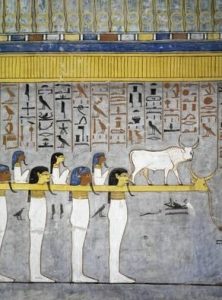 The Burial Chamber of the Tomb of Ramses I, which is most probably meant to be the vestibule of a much larger hall, was left unfinished. The only decorated part of the tomb is on the walls of the Burial Chamber as there are colorful scenes from the Book of the Gates and representations of Ramses I in front of different deities. We can see a finely decorated scene in the small niche, on the rear wall of the chamber, showing Osiris standing in a shrine, his feet on a snake, protected by the uraeus-cobra and Anubis. Inside the Burial Chamber, Belzoni found a red granite sarcophagus painted red with yellow figures, with their details in black, which are of Anubis, Thoth, Isis, Nephthys and the Four Sons of Horus.