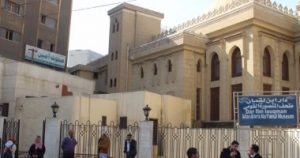 The foundation of Ibn Loqman House is attributed to Ibrahim Ibn Loqman. Built in circa 975 AD, it lies in Port said Street, in the city of Mansura. It was the place where Louis IX of France was imprisoned after being defeated by the Egyptian troops in the Seventh Crusade. The house employs the Arab style of architecture, being divided into two constructions: the Haramlek (women-specific residence) and Salamlek (men-specific residence). It has two Islamic-styled stories; and the door of the house measures over 2 meters long. The first storey has two sections. One section has two rooms with a small niche at each. The other section once comprised two rooms, but it now has a wide hall that houses a huge portrait of the Battle of Mansurah against the Crusaders, a half statue of the leader Saladin as well as a huge collection of weapons shields and arrows used at this era. A wooden staircase leads to the second storey which comprises only one room which is said to be the place where the French leader was captured. What most distinguishes this room is the life-size statue of Louis IX with his hands tied with chains and fetters. Interestingly, the house resembles a museum containing articles that belong to the French monarch, the suits of mail, the swords of the Crusaders, a collection of maps and huge paintings depicting the Battle of El-Mansurah.

The Mosque of El-Saleh Ayyub El-Kebir

The Mosque of El-Saleh Ayyub El-Kebir is one of the most important monuments in Mansurah. It was built by a loyal servant of the Ayyubid Sultan, El Saleh Najm El-Din Ayyub. It is described to be a piece of great architecture and design.