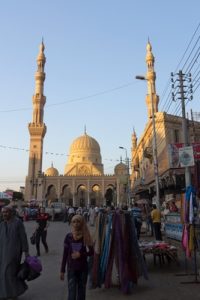 Sheikh Ahmad Al-Badawi, a Muslim Sufi hermit, was born in Fez, Morocco in 596 AH and died in Tanta, Egypt in 675 AH. A Mameluke- styled mosque renowned for its stunning architecture was erected in his honor. This mosque was built by Abdel-Aal, the vicar of Sayed El-Badawi and a Sufi who traveled from Morocco to Egypt during the Mameluke era. Later, it was enlarged by El-Sultan El-Nasser Ben Qalawoon and further expanded by Seifeddin Qaitbey. In the modern era, the mosque was restored under the rule of Mohamed Ali and under King Fouad. The mosque's facade built of marble shows a masterpiece of Islamic architecture. The entrance and the two Minarets of the mosque were erected in the early 1960s. It is said that the three green domes were skillfully modeled to honour the hermit and his successors: Abdel-Aal and Migahed. Next to the mosque is a library that houses great deal of masterpieces dating back to the 8th century. Next to the Mosque of El-Badawi stands the sabil (public fountain) of El-Ahmadi Mosque. Annually, the mosque takes a more glorious appearance during the hermit's Mulid (or the festivity of his birthday) when more than two million people swarm to it.

In 1913 AD, the Egyptian Government decided to establish a Museum of Archeology in Tanta, inside the municipality building. It was closed and reopened several times and its contents were put in storage. On 29 October 1990 AD, the Museum was opened to the public. It occupies 5 floors: the first four