Fortress of Babylon in Cairo - Main Destinations in Egypt : Cairo, Much More Than a City : Cairo Gates & Towers : - Egypt : 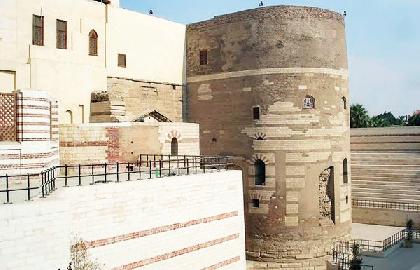 The city of Cairo owes its existence to Babylon fortress, as here is the oldest part of the City and the remains of its oldest structure. This fortress was established by Emperor Trajan, on the Nile eastern bank as a means of protection for the canal that linked the Nile with the Red Sea. On the right side, appears the first tower of the southern gate that lies next to the Coptic Museum.

Whereas on the left, stands the other tower on which Church of Saint George had been founded. Babylon Fortress contains many of the Coptic oldest churches that were built on its walls including Saint Mark Church , the Greek Church of St. George, The Hanging Church and other Coptic churches.

The Gate or Bab El-Azab that situates in El-Qalaa off Salah El-Deen Square was attached by Sultan Radwan Katkhuda to the Citadel. It was used as an entrance for the infantry or Azaban who were living

The most admired part of the Cairo Walls can be seen in the point in which the Street of Galal and the Street of Mansuriya and next to some parts of both the Northern walls and the Ayyubid wall. The w